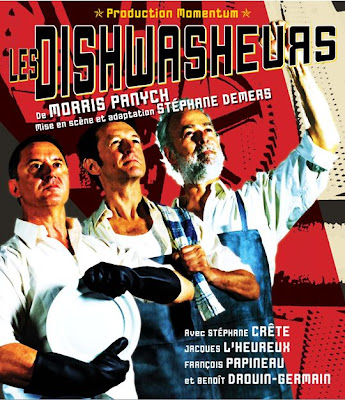 A path through St. Henri is not unlike the trip to the bathroom in a Montreal restaurant. Walking by dark alleys between oxidizing industry, covered in graffiti - like going down the steep stairs into the damp basements of eateries and hearing the dishwashers curse - gives the sense of catching a glimpse at the back end of things; of having gone behind a door marked “Authorized Personnel Only.” At Atelier Jean-Brillant, Théâtre Momentum sets its translation of Morris Panych’s Dishwashers in precisely the type of damp, poorly ventilated, concrete and steel room that makes up the engines of the neighbourhood’s fancy restaurants.


the only thing missing is the smell

In this hyper-realistic setting, we’re flies on the walls of the wheelhouse. If you are of the demographic that dines in, rather than works at such establishments, the grit may startle you. If you’ve ever earned minimum wage in food service, you might be startled that people would pay to be subject to the conditions. Geoff Levine and Sam Scafidi’s set and props are so true to life that you feel as though the only thing missing is the smell. That is, until the effect of the dishwashers’ smoking habit is felt. The realism of this production extends to the need for better ventilation championed by New Guy Emmet, (Stéphane Crête) a failed broker who’s taken to the dish pit of a place he once frequented to make ends meet.

The set and setting of this production really steals the show. The motion dance among the clanging of the dishes, and the roaring and beeping and whirring of machines is mesmerizing, and helps us appreciate that this manual labour isn’t something most would consider a “real job” but is indeed real work. Emmet, through the water, the steam and the smoke, spends his time waxing philosophical about how real estate can be dirty work, and how market trading can make one sweat, while never really breaking one himself. His porcelain face, versus his glowing and shining betters reinforces that although he may - by his perceived misfortune - be among them, he is not of the class that operates the underbelly. Forever concerned with where he comes from, rather than where he is, the New Guy will never really be a dishwasher. Les Dishwasheurs posits that class war is a war with our selves. Work is work. Why do we assign value to it in the ways we do?

Les Dishwasheurs continues to October 20
Posted by THE CHARLEBOIS POST at 4:27 PM