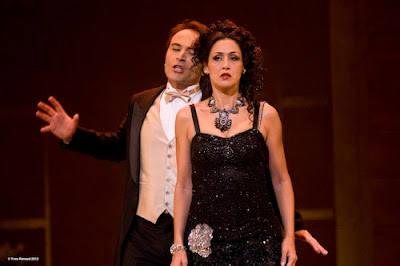 Grand and glorious, La Traviata arrived at Place des Arts this week with five different sets, an immense cast, a full orchestra and one of Giuseppe Verdi’s most famous scores. Opéra de Montréal has aimed to make a splash with the opening production of their new season and they’ve succeeded admirably, creating a great pageant of song and spectacle that brought the first nighters to their feet almost before the final curtain fell.

Most people of any wisdom don’t go to the opera for the story, which is a good thing when sitting through La Traviata - the less said about the “plot” the better. Suffice it to say there’s the requisite lovers (Myrtò Papatanasiu and Robert de Biasio), a father who drives them apart (Luca Grassi) and a little tuberculosis to threaten things just as the lovers are getting reunited. It’s a silly plot which provides ample room for sweeping arias, gorgeous recitives and chorale numbers that leave you breathless, all of which Opéra de Montréal are more than happy to provide.


As an added bonus, she’s even the proper age to play the young heroine

As the title character – La Traviata means “the fallen woman” – mezzo-soprano Myrtò Papatanasiu is both ravishing and moving as she navigates the speedy emotional transitions of her character. Whether playing the flighty party girl of Act One or the woman dying alone in Act Three, Papatanasiu makes it look nearly effortless to sing Verdi’s exquisite score. As an added bonus, she’s even the proper age to play the young heroine – not always something that can be said in the opera – and her youthful energy  adds a playfulness to the character that endears us to her right away.

The men in the show are equally dynamic, with Robert de Biasio sweeping easily into the role of Papatanasiu’s lover: his tenor voice never wavered once and he brings a great fire to the performance, making his public shaming at the end of Act II all the more moving. Equally memorable is Luca Grassi as the occasionally villainous Giorgio Germont. I say “occasionally” because his character shifts so rapidly – again, ignore the plot and concentrate instead on that deep, molasses-thick baritone that fills the room from the start of the second act.

The supporting players all enjoy themselves, especially the male chorus who get to perform the famously silly Di Madride noi siam mattadori – “We are the Matadors”. Essentially designed to allow the soprano time to change costumes, the cast has great fun with the piece and even manages to throw in a few sight gags that actually work.

Credit director Michael Cavanagh for this; a man with dozens of operas under his belt, Cavanagh whisks us from pageant to comedy to tragedy with surprising ease, making this show a feast for the eyes, the ears and the heart. While we’re at it, we might also tip our hat to conductor Fabrizio Maria Carminati, whose work behind the scenes undoubtedly formed the backbone for this production.

In the end, La Travaita will probably always be an opera for people who love opera. The story won’t win any friends, especially today when our idea of what makes a “fallen woman” is more then a little different then it was in 1853. But something remains glorious about the show, especially when it’s given a spirited production like the one provided by Opéra de Montréal. It’s this which probably explains the show’s continued appeal: silly story or not, the show is the perfect theatrical confection, as enjoyable as the richest of desserts.

Read an interview with Myrto Papatanasiu
Posted by THE CHARLEBOIS POST at 4:00 PM