“Weejuns, John Lennon and White Rabbit—I dig it ”
by Andrew Cuk
There is perhaps no more appropriate place to follow Horace’s dictum that theatre should teach and please than in an educational environment. Each production has references to political, geographical and cultural history, whether those histories are in the present, two thousand years ago or in the made-up references of fantasy. This term at John Abbott College, I am directing the two-year cégep students in a production of Wendy Wasserstein’s The Heidi Chronicles, a play that gives the opportunity to teach seventeen to nineteen year olds about a time period their parents were born into and lived through.

Wasserstein’s play is a minefield of American (and New York City) musical, political and cultural references from 1965-1989.


This Pulitzer Prize and Tony Award winning drama is a pleasingly serious comedy, chronicling the journey of Heidi Holland from the end of her high school days and the beginnings of the feminist movement to her discovery of personal balance. We see her struggle over a quarter of a century with love, career (art history teacher), activism and her place in the world. Heidi strives with the choices that many women of her generation made: career or family, and in the process discovers “having it all” is more an inner journey of self-discovery.
Wasserstein’s play is a minefield of American (and New York City) musical, political and cultural references from 1965-1989. It seems as if every other line has some specific allusion upon which a witty remark hinges. The students’ first assignment after reading the play was to look up anything they did not know, from who is Bobby Kennedy and Felix Frankfurter to what are weejuns (remember penny loafers?) and LPs to Aretha Franklin singing “Respect” and the psychedelic “White Rabbit” by Jefferson Airplane. Although many teachers are rightfully wary of Google and Wikipedia as accurate academic research tools, they do come in very handy for an assignment like this. Students can listen to the songs, see images of the clothes and read about the historical period quickly and with ease from their laptops or smartphones.
The actor needs to understand the elitist difference in attending Trinity in the United States versus Trinity in Cambridge, England.


In a number of cases, the actor-student must go beyond superficial information because the reference may contain a nuance that explains the point. For example, when Heidi tells her on-off love interest that she is dating an editor who went to Trinity in Hartford, Connecticut, Scoop snobbishly responds, “You’re sort of living with an editor who went to Trinity College, Hartford!” Merely knowing that he is talking about a college in Connecticut, does not explain Scoop’s disdain. The actor needs to understand the elitist difference in attending Trinity in the United States versus Trinity in Cambridge, England. A number of scenes are situated during important historical moments. One scene takes place during Eugene’s McCarthy’s 1968 bid for the Democratic nomination for President of the United States. Another occurs on the day Richard Nixon announced his resignation from the Presidency, and yet another: the day of the mass gathering in Central Park, New York, to mourn the murder of John Lennon. Each historic moment is a metaphor for something happening in the play or to the characters. What does it mean that the characters attend a baby shower while others are in Central Park lamenting? Could Wasserstein be hinting that individual stories continue alongside history, that our personal journey and discovery is as interesting as those moments? Perhaps she wants us to see that they are more interesting and worthy to be the subject of a play. In the end, what we remember is not the political comment Shakespeare may be making by writing a play about a black noble, but that a man is overcome by his jealousy and kills the very thing he loves. It was great fun exploring these connections with the student cast. 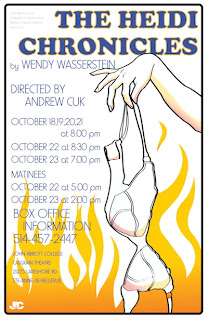 As this play gets older and further away from the era in which it so firmly sits, the humour will become less and less funny. It’s always a letdown when the joke must be explained. The student actors have embraced bell bottoms, hi-fis and Sam Cooke, and have entered the world of their parents, and in some cases their grandparents. It has given me great pleasure to be their tour guide.
The Heidi Chronicles
by Wendy Wasserstein
directed by Andrew Cuk
John Abbott College Theatre Workshop Production
October 18-21 @ 8:00 PM; October 22 @ 5:00 & 8:30 PM, October 23 @ 2:00 & 7:00 PM
Casgrain Theatre, John Abbott College, Ste-Anne-de-Bellevue
Box office: 514-457-2447; www.johnabbott.qc.ca/public-media/theatre
Posted by THE CHARLEBOIS POST at 3:53 PM