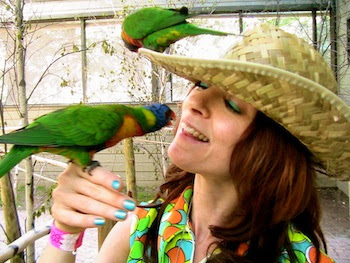 The UN-definable Catherine Kidd
A highly anticipated return to our stage after a journey in and out
by Barbara Ford
As we sat down to a late afternoon latte at Kilo, the spirited Catherine Kidd immediately jumped into the who, what, and wherefore of her newest creation, Hyena Subpoena. It was like sitting next to a lit fuse, the sinewy wire twisting and coiling as it burned, sparks flying, unpredictable but mesmerizing. Though this is supposed to be a profile of the artist’s life, I decided to see where this would lead me because if there is one thing I am certain of, it’s that there is no place Kidd could take me that is not fascinating and thought-provoking, so down the rabbit hole I leapt.
Poet and activist Mona Morse is the subject of Hyena. She receives a grant to write a series of poems but her final product is panned by the critics who go so far as to call her crazy. She flees to the bushveld of South Africa where she morphs into a human-hyena hybrid. Through eight stories based on encounters with various animals, in true Künstlerroman tradition, Mona recounts the rocky ‘school of hard knock knock jokes’ that has shaped her. Slowly she peels off one layer after another, a Shamanic strip tease, slowly revealing the dark milestones that have mapped her life’s journey eventually landing her in a residential psychiatric unit. Kidd explains that it’s really two story lines grafted together: the narrator’s story and the animal’s stories, which become emblematic of the narrator’s past experiences as she negotiates those tricky grey areas between predator and prey, individual and society, freedom and captivity. 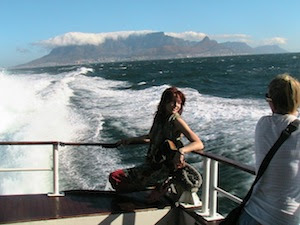