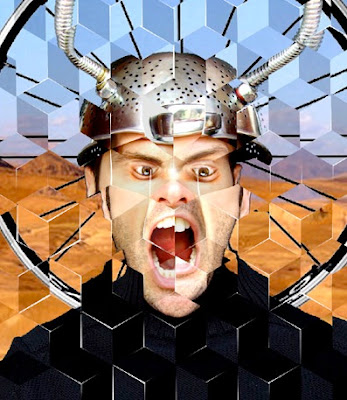 Inside the Head of Another...Down the rabbit hole
Upstage Contributor Stephanie Breton spoke with Actor Chimemwe Miller about Talisman Theatre’s presentation of Coma Unplugged. Below is an abridged version edited by Estelle Rosen, CharPo Editor-In-Chief.
UPSTAGE

You’re playing  Ishouad, a Touareg  warrior.
MILLER
I’m playing one of the fictitious characters that occurs only in the main character’s imagination. Without giving away too much,  it takes place in the subconscious mind of the main character who is in a comatose state. There are many dreamlike happenings. I’m one of those characters who occurs in that state.
UPSTAGE
Hence the title Coma Unplugged. You’re in the main character Daniel’s head?
MILLER
I guess it’s akin to being in a dream where the mind is trying to unravel itself and deal  with life and its challenges. It’s also one of those situations where it resembles the flashing of one’s life when people get into an accident. Exciting play to be part of.
That character carries a lot of pride around and also he represents the imagined stereotype who this Touareg Warrior could be.
UPSTAGE
I could hear the pride when you mention your character.
MILLER
That character carries a lot of pride around and also he represents the imagined stereotype who this Touareg Warrior could be.
The imagined stereotype being that the main character  knows certain things about Touareg but I wonder how much he’s actually delved into learning about this culture. It becomes the fantasized romanticized version of what a Touareg warrior should be
UPSTAGE
Because so much is happening in one’s head, how much is real?  Were there lots of discussions about how real it should be?
MILLER
That’s at the core of it. Even for the characters representing real people in his life how much of it is their voice with his thoughts being projected through his voice. How much of it  relates to real situations, real conversations he’s had in his life. For an actor being able to discern where you have to remain as a true character with feet firmly planted on ground or where you go into that feverish state where everything is warped and all of a sudden you’re driving a truck and the truck turns into a pumpkin and the pumpkin is a bowl of soup – how far down the rabbit  hole does one want to go.
Oct. 20-29
Studio Jean-Valcourt
Conservatoire d’art dramatique de Montréal
4750 Henri-Julien
Posted by THE CHARLEBOIS POST at 12:01 AM