First-Person: Kelly Herrmann on Into The Woods 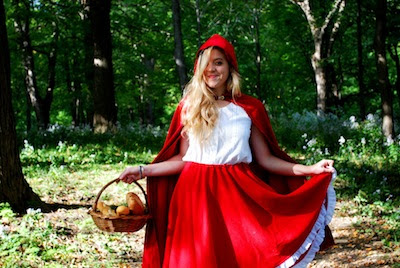 Into the Woods (and Who Can Tell What's Waiting on the Journey?)
By Kelly Herrmann
Whether you've seen the show once or performed it 100 times, Into the Woods never leaves you. Having been a part of this musical with two theatre groups, Into the Woods has become such a part of me that I find myself unintentionally quoting it at the most unexpected times.  Let me tell you my story-- with the help of my friend Stephen Sondheim.
"Once upon a time..."
I played the role of Cinderella in my grade 12 production of Into the Woods. It was as wonderfully awkward and exciting and fun as any high school production. I enjoyed myself immensely, but feared that I would be too busy at university to ever think about being in a musical.
Well, Kelly, I guess you should "let the moment go. Don't forget it for a moment, though." Leave your theatre days as fond memories and focus on the new challenges ahead.
"Once upon a time...later."
Fast forward almost 3 years. There is a new theatre group in town called Music Theatre Montreal, and they will soon hold auditions for an October production of Into the Woods.
So, Kelly, do you rekindle your acting flame despite the daunting amount of schoolwork you will undoubtedly face? Go "into the Woods...again?" Well, "why not both instead?"
"And you're back again, only different than before."
...as the Baker's Wife in Music Theatre Montreal's upcoming production. And it really is different than before. To be thrown into a group of such mature, talented, and enthusiastic individuals after participating solely in high school theatre was quite a shock. Rehearsals were not without their occasional hiccup, but things were going as well as could be expected. Little did we know that "any moment we could be crushed."
"To find a future..."
Because of the ongoing MUNACA strike at McGill, our contract with the original performance space was cancelled 3 weeks before we were to open. This caused us many financial and logistical issues, to say the least. Our production team could have spent their time playing the "your fault" blame game with McGill.  Instead they chose to gracefully pursue other options. We were enormously lucky to find our new home, the D.B. Clarke Theatre at Concordia University.
"And happy ever after!"
As opening night draws near, we realize that "the greatest prize can often lie at the end of the thorniest path." In between venue scouting, contract negotiating, tree painting, bake sale-ing, and fundraising, we've managed to put together a show we're really proud of. Into the Woods will make you laugh, cry, cringe, jump, and gasp-- it's a brilliant metaphor for real life. It touches everyone where they can feel it most, and turns a night at the theatre into a moment that won't be forgotten. Because, really, "that's what woods are for...for those moments in the woods."
Our show runs October 13th-15th and 19-21 at 7:30 with a 1:00 matinee on the 15th, as well as the 19th to the 21st at 7:30. We are graciously housed by the D.B. Clarke Theatre at Concordia University (1455 Maisonneuve). Tickets and more information are online.
Posted by THE CHARLEBOIS POST at 12:02 AM

Email ThisBlogThis!Share to TwitterShare to FacebookShare to Pinterest
Labels: Into the Woods, Kelly Herrmann