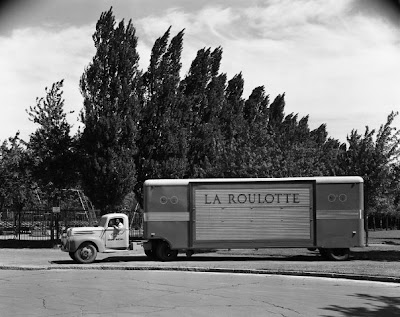 Théâtre La Roulotte celebrates their 60th anniversary with a classic.
Peter Pan
Playing until Sept. 9 at a park near you.
(Photo via Facebook - the celebrated Roulotte, 1953)

This seemingly charming old couple turns out to be quite the pair of con artists.
Le Secret de Béatrice
Théâtre Saint-Sauveur

When the family whose annual camping tradition  is threatened by camping site expropriated by big business, they fight back.
Le Noel du Campeur
Théâtre des Tournesols (Cowansville)
Posted by THE CHARLEBOIS POST at 12:01 AM