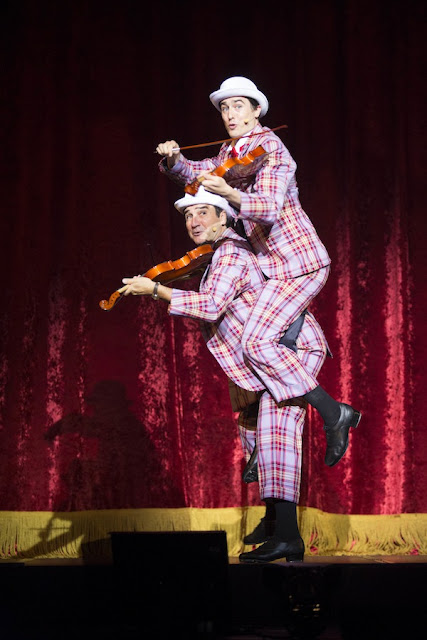 Gimme that ol' Razzle-Dazzle
No rain on this parade
by Valerie Cardinal
Since I’m a huge fan of the original 1952 movie Singin’ in the Rain, I was intrigued to hear about Chantons sous la pluie, the French adaption making its debut at this year’s Just For Laughs Festival. Directed by Denise Filiatrault, translated and adapted by Yves Morin and starring René Simard, this show has some Francophone star power attached to it. Still, I wasn’t sure if Singin’ in the Rain could work in French. Boy, was I wrong!
The show is set in glamorous Hollywood, during the awkward transition from silent films to talkies, and the beautiful costumes and wonderful sets do a great job of transporting the audience to that glamorous era. Renaud Paradis plays Don Lockwood, the leading man of the silent era, and Pascale Desrochers plays Lina, the leading lady who has some trouble adapting to talking films. Paradis is wonderful as Don, bringing charm and powerful dancing to the role without resorting to imitating Gene Kelly.
As someone who often gets annoyed with French translations, I was pleasantly surprised by the songs in Chantons sous la pluie.

Pascale Desrochers as Lina is particularly notable for making her character a broad, comedic, villainous caricature of a fame-hungry Hollywood starlet. She adopts a high-pitched squawk as her voice, and she definitely knows what she’s doing because  that voice rarely wears out its welcome. Marilou Morin as Kathy, the woman who shakes up Don’s life, brings a beautiful voice and sweetness to the role.
As someone who often gets annoyed with French translations, I was pleasantly surprised by the songs in Chantons sous la pluie. All were very well adapted and retained their original catchiness. Make ‘Em Laugh becomes Rire aux larmes, Gotta Dance! becomes Viens danser!, Good Mornin’ becomes Bien l’bonjour, and so on. The talking between the songs was also excellently adapted; there’s something musical in the French language that just works with the dialogue. I also enjoyed that the actors played around not only with the French language, but with many different French accents.
René Simard’s showmanship is well-applied to the role of Cosmo Brown, Don’s piano-playing sidekick. His smile is infectious and he draws your attention when he’s on stage. It’s amazing that this is the first time Simard has danced in ten years, as he completely blew me away. He even executes some impressive acrobatics; some of his stunts had me gasping out loud in surprise. Jacques Girard as Roscoe Dextera, the cranky film director, and his cronies deserve some recognition for their hilarious physical comedy as well.
the long first act is justified, since there is absolutely no lull in the action or energy
This is a long show, but it’s so jam-packed with dancing that it feels very short. I was shocked when it was already 9:45pm during the intermission. However, the long first act is justified, since there is absolutely no lull in the action or energy. And as for the famous Singin’ in the Rain scene, my only complaint is that it was too short! Although it was amazing to see Paradis joyfully splashing through the curtains of real water streaming towards the stage. Be warned that the front row is a splash zone.
The only scene in the show that was unnecessary was one where Lina Lamont gets a whole song to herself. With her squeaky voice and exaggerated personality, she’s a character best used sparingly, and this was too much. Out of all the musical numbers, it was the most forgettable.
The ending of the show was also a little abrupt. I was clearly not the only one in the audience who wasn’t clapping when the bows started because I didn’t know if there was going to be another scene.
However, Chantons sous la pluie could truly be a gateway and a mind-opener for bilingual audiences. For Francophone spectators, it provides an introduction to old Hollywood and Broadway musicals. As for the Anglo viewers, it serves as a way into French theatre.
Chantons sous la pluie is a razzle-dazzle, Broadway-style, feel good show that will leave you singing and dancing your way out of the theatre. If you can get tickets, it’s well worth it!
Run Time: 2h30 (with intermission) to August 25
Website
Posted by THE CHARLEBOIS POST at 3:55 PM