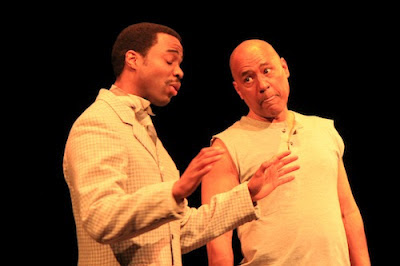 Class, Race and a Big Boat
An unlikely meeting of two figures is wobbly
by Sarah Deshaies

You’ll remember the flurry of stories and reports that arrived last spring to coincide with the centennial of the sinking of the Titanic. All that fuss proves that the tragedy still holds our imaginations captive, decades later. So here is Titanic: The Untold Story, a tale that might otherwise be consigned to the deep for some theatre-goers.

Joseph Laroche is thought to have been the sole black passenger aboard the Titanic. An Engineer by training, he boarded the doomed ship with his pregnant wife and two little daughters at Cherbourg, France bound for Haiti, his homeland. Faced with discrimination and little hope of work in Paris, Laroche (Conrad Caton) was seeking a new life, like others on the ship.

Like the Unsinkable Molly Brown, his Titanic-tinged fame is enshrined in song.

Laroche’s story is bound to that of Jack Johnson, the first black heavyweight boxing champ and “the most famous negro in the world.” In fact, Laroche is about to begin his tale when Johnson swoops in to reveal his. Both recollect their memories of the Titanic, but under different circumstances. Laroche boarded the ship, but Johnson luckily did not, denied a ticket because of his race. Like the Unsinkable Molly Brown, his Titanic-tinged fame is enshrined in song.

Laroche is every bit the cultured gentleman, and doting family man, European and genteel. Johnson is a fighter, all bluster and bravado; a rambunctious American. They clash, but their stories are similar: unceasing struggle against prejudice so unbelievably omnipresent. Racism and oppression is the iceberg in their lives. (Montreal actor Patrick Charron plays the guardian of white privilege in a few guises.)
We know what inevitably happens to the Titanic, so there is no taut suspense as to the fate of our heroes. Where they end up is of less interest than the tales of hatred they share.

Racism and history: it’s heady stuff, but does not a fine drama make. Sherwood is perfectly delightful and memorable as Jack, while Caton is elegant and earnest but not terribly endearing. The story to begin with is unusual: a kind of Waiting for Godot for two black men who never knew each other.
There is chemistry between Caton and Audrey Ferron, as his wife, but their key dramatic moment falls flat.

Sherwood’s eponymous company is devoted to telling African-Canadian stories; in fleshing out and bringing Laroche’s story to light (and less Johnson’s) he does us a service in pointing out the story of a man with a singular story. But as a theatrical piece, it is spare and unconvincing at times.

Like a ship on the sea, there are several ports of call for Titanic: The Untold Story, Montreal being but one of the first stops on a theatre tour. Hopefully with time, the play will be honed from a second-class ticket on a first-class story.

Titanic: The Untold Story runs at the Segal Centre’s Performing Arts Studio until July 22, 2012. Two hours, including a 15-minute intermission.

Read also: Anthony Sherwood's first-person piece on the creation of the play.
Posted by THE CHARLEBOIS POST at 4:00 PM