Review: The Devil's Music: The Life and Blues of Bessie Smith 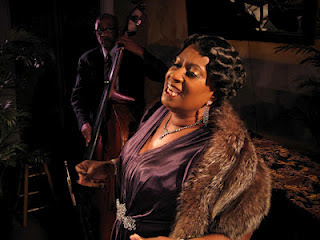 THE DEVIL AND BESSIE SMITH
joel fishbane
Part theatre and part concert, The Devil’s Music: The Life and Blues of Bessie Smith has arrived at the Montreal Jazz Festival to delight jazz fans and bewilder theatregoers. Straddling that grey zone between jukebox musical and a Vegas floorshow, The Devil’s Music is an unflinching ode to a boozy and bawdy vocalist who paved the way for the 20th century’s other great singers, from Ella Fitzgerald to Nina Simone.
Scripted by Angela Parra, The Devil’s Music is essentially a one-woman show in which Bessie Smith (Miche Braden) spends the last night of her life staging one final concert, reflecting on her life and drinking a lot of gin. Joining her is an exquisitely bluesy trio comprised of Aaron Graves (piano), Jim Hankins (bass) and Keith Loftis (saxophone / clarinet).

Most affecting are when she gets to stretch her acting muscles in the few moments when music and narrative collide.


The most essential parts of her life are discussed, from when she was told she was “too black” for the colored music labels to losing custody of her child after her husband testified she was unfit. But the true star of the show is the music and it continues to take centre stage. There’s nothing intrinsically wrong with this – Braden definitely has the chops for the part and the music is magnificent – but at times it interferes with the narrative so much that it threatens to derail any emotional investment we might have in the show.
Miche Braden gives a brash and sassy performance, flirting with the front row, taunting the crowd and trading jibes with the band. She’s been drawing rave reviews everywhere the show goes and rightly so – she may not really be Bessie Smith, but after a while you start wishing she was. Most affecting are when she gets to stretch her acting muscles in the few moments when music and narrative collide. In the number after Smith loses her custody case, Braden expertly carried the emotion of the moment into the song.
The show is gloriously racy – there are things done with a saxophone that you shouldn’t ever describe in polite society – and this is in keeping with Bessie Smith’s own bawdy life of booze, drugs and amorous adventures with both sexes.  The Devil’s Music doesn’t celebrate any of these things but it does celebrate Smith herself; if it fails as wholly satisfying drama, it succeeds as a gloriously theatrical event. I defy you not to spring to your feet when the evening ends. The ghost of Bessie Smith practically demands it.
The Devil’s Music: The Life and Blues of Bessie Smith by Angelo Parra plays at the Festival International de Jazz de Montreal until July 7. For tickets visit www.montrealjazzfest.com or call 514.842.2112


Read also Richard Burnett's preview of the show.
Posted by THE CHARLEBOIS POST at 4:02 PM