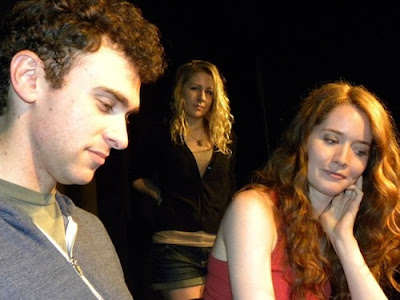 What's In a Name?
Zoofest features good ol' Scots spunk!
by Chris Lane
Scottish Sperm isn’t actually about Scots. Well, maybe one of them. I’m not quite sure. There were a lot of things in this play that I didn’t quite get a handle on. That being said, I still thoroughly enjoyed this sharp and amiable little work.
The play is written by New York’s Jacqueline McLaren and was originally performed for last year’s Edinburgh Fringe. Its three characters are Robert, a writer who’s given up writing; Emma, a teacher with a fondness for alcohol and a total inability to make so much as a sandwich; and Sarah, a saucy blonde photographer who has no furniture in her apartment across the hall. Sarah’s roommate Amy, and her not-boyfriend Elliott, somehow manage to be significant characters as well, both in the play itself and in Robert’s writing. Robert says early on in one of his monologues that he likes to tell stories that may or may not be true, which sets the stage for a very non-linear play that occasionally contradicts itself. He writes about the people in his life, and the play blurs the lines between what he is writing about the characters and what they actually do.


Scottish Sperm is a series of short scenes that follow a vaguely back-and-forth chronology and feature the interactions between Robert, Emma and Sarah. Robert and Emma start a relationship that seems to be held together only by virtue of both parties being serial monogamists, and Sarah tries not to ruin the relationship as she’s “not a real person,” in her own words.
The transitions between the scenes are smooth and the blocking is generally very sharp, and the play manages to bend reality just enough to show who the characters really are. The dialogue is fast and witty, and Robert’s monologues are particularly funny, so you should pay close attention to notice all of the excellent jokes he subtly slips in.
This play about relationships, writing, and writing about relationships, succeeds at being charming, irreverent and insightful, and both a little bit absurd and yet very real. It’s quite funny, neatly produced and well worth seeing.
Zoofest website
Read also an interview with Jacqueline McLaren
Posted by THE CHARLEBOIS POST at 4:21 PM