The Upstage Interview: Kirsten Rasmussen and Alex McCooeye on The Taming of the Shrew 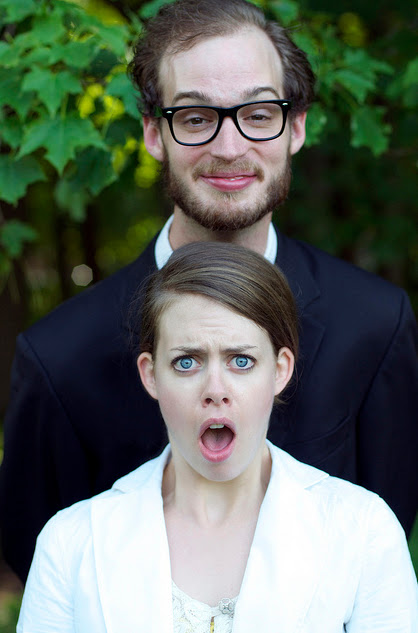 I definitely thought it was a misogynistic play.  I’ve completely changed my mind.

Upstage and CharPo Contributor Sarah Deshaies spoke with actors Kirsten Rasmussen and Alex McCooeye  about Repercussion Theatre’s Shakespeare-in-the Park presentation of Taming of the Shrew.
UPSTAGE:   I wonder since there must be a period of time when rehearsals are indoors, what’s the transition like to perform outdoors, there must be a ton of things to get used to.
MCCOOEYE: I’ve never performed outdoors before. You get used to having a back wall to play to; the outdoors is unpredictable. Yesterday we were rehearsing and a giant caterpillar was on one of the props; we had to take a break!
UPSTAGE: I understand it’s the first time for both of you to be doing Taming of the Shrew. What drew you to this play?
RASMUSSEN:  I was brought on quite last minute. I found out 3 days before rehearsal that I’d be featured in the cast. It was very exciting. I’ve been pursuing comedy since I’ve been in Montreal, and doing mostly solo shows, so it’s fun to be working with other people.
UPSTAGE:  How different is it to be embarking on a more traditional theatre piece and outdoors as well?
RASMUSSEN:  It’s fun. I did 24 shows in 14 days during the Fringe. It was awesome. This is the craziest my life has been in a long time.  But definitely the happiest I’ve been in a long time.


UPSTAGE: What about you Alex?
MCCOOEYE: I live in Toronto right now, I love Montreal, I love Shakespeare. It’s yet another experience that is completely new; I’m loving it.
UPSTAGE: Tell us a little bit about the performance of The Taming of the Shrew this year.
RASMUSSEN: Andrew Shaver is bringing out some hilarious bits that are so much more physical than I’ve seen done for this play.
MCCOOEYE:  It’s also bare bones; the  set being attainable and small means reliance is on actors to bring out the comedy. Definitely a comedic take on a play that sometimes doesn’t have a lot of laughs throughout.
RASMUSSEN:  The other aspect is the love story between Kate and Petruchio. Lots of people say it’s such a misogynistic play. We’re telling it as more of a love story between two misfits. I find it more inspiring to present it this way. As one of Petruchio’s lines says…
MCCOOEYE: Where two raging fires meet together, they do consume the thing that feeds their fury. (cont'd) 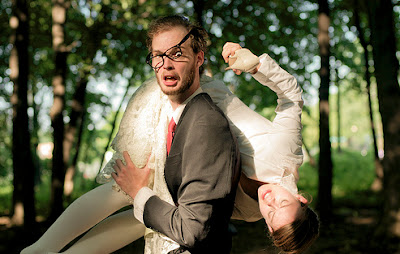 UPSTAGE: Do you feel like you’re re-inventing the traditional story?
RASMUSSEN: No. In Shakespeare’s time, women were the property of their husbands. So he wasn’t writing this edgy sexist show; he was writing about how it is.
MCCOOEYE: At the top of Shakespeare’s play there’s an induction scene where these guys come to watch the play. Sort of a play within a play. That scene is usually cut as we have too. What that scene does is  give you liberties to make it a farce and have a good time. Not having the induction you automatically are real people; nice combination of farce and reality.
It’s fascinating to work on because I definitely thought it was a misogynistic play.  I’ve completely changed my mind.
UPSTAGE: At what point did you change your mind?
MCCOOEYE: About half way through, I came to see it’s actually a game two people play. It’s not me dominating. Her character has a lot of power over him. They’re both desperate; misfits as we said.
RASMUSSEN: Each character has their time to shine. It’s not a tale of one person dominating.
MCCOOEYE: Like many relationships there’s all these power-ships happening.
RASMUSSEN:  There are times he’s unsure if she’s still for him. They test each other out back and forth.
UPSTAGE: The story of relationships never gets old, particularly power balance.
MCCOOEYE: There’s another couple in the show, which makes for an interesting dynamic.They represent young puppy love next to ours which is more a lasting we’ve-gotta-work-at-this kind of relatonship.
RASMUSSEN: Their love is so wide eyed and accepting. Ours is they fight until they’re hugging.
UPSTAGE:  Kirsten, you came into the show late in the game. How did  you two find the rhythm?
RASMUSSEN: We had met at Wildside. I think both of us are goofballs and potentially Petruchio-ish and Kate-ish so it works out.
MCCOOEYE:  Working with someone who’s so aware of comedy and what comedy is I don’t think we ever miss a moment in the play for a potential joke. Andrew too always has his eye on what’s the joke here. Matt Gagnon of MattandKyleandMatt plays Petruchio’s servant; he’s also hilarious. He makes all of us laugh.
Website
Posted by THE CHARLEBOIS POST at 12:02 AM