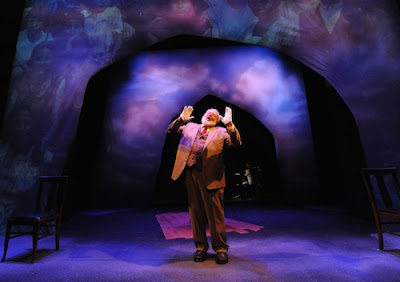 The Segal Centre for Performing Arts and CJAD 800AM are proud to present
Sunday-@-the Segal
Sunday, July 8th at 11am
Sholom Aleichem: Laughter Through Tears by Theodore Bikel
Montreal, June 19, 2012 - For the final edition of CJAD Sunday-@-The Segal, we are pleased to announce that renowned talent agent and owner of Artists Group East Robert Malcolm will join us for an intimate talk prior to the first preview of Sholom Aleichem: Laughter Through Tears. This is an exciting opportunity to interact with one of the most respected figures in American show business in the intimacy of the Segal theatre.
Longtime friend and agent to Theodore Bikel, Mr. Malcolm’s lecture will offer insight on the career of the legendary stage actor, the production of Sholom Aleichem, and his own experience as one of the most respected figures in American show business. The talk will be followed by a Q & A session.
About Robert Malcolm
A protégé of famed actress and drama teacher Uta Hagen, Robert Malcolm was a professional actor and director for almost 20 years before becoming one of the most prominent talent agents in the United States. In 1984, he took over the Artists Group Ltd. in New York City, left to him by his own agent after her death. Driven to expand his business, he traveled to Los Angeles in search of a west coast agency to represent his New York clients. One of those agencies was The Artists Group Ltd., and by 1987, Robert was representing most  of  their west  coast  clients in New York. Robert eventually took over the group in 1990, changing the name to The Artists Group East, which he still owns today. For over twenty-five years, he developed a roster of well-known actors including Jerry Orbach, Mickey Rooney, Ann B. Davis.  Florence Henderson, Shirley Jones, Barry Williams, David Hedison, Loretta Swit, Jamie Farr, Bill Christopher, Harry Morgan, Judy Kaye. Dom Deluise, Charles Nelson Reilly, Carole Cook, Theodore Bikel and Gary Coleman, many of which he still represents today.
About Sholom Aleichem: Laughter Through Tears
Sholom Aleichem (1859-1916) captured the imagination of generations with his humorous and evocative tales of Shtetl life. Now almost 100 years after his death, the legendary Theodore Bikel takes to the Segal Centre stage in a captivating solo performance that celebrates the work and legacy of the leading Yiddish author, often referred to as the “Jewish Mark Twain”. Drawing from over forty volumes of Aleichem’s work, Bikel brings to life one of literature's most beloved authors and a bevy of the unforgettable characters he created: Menachem Mendel, Beryl Itzik and the iconic Tevye the Milkman, whom he has played more than 2,100 times in Fiddler on the Roof. A story that magically melds times long gone with matters that tug at our heartstrings, Sholom Aleichem is a love letter to Jewish culture performed by one of the most accomplished performers of our time.
About CJAD Sunday-@-The Segal
Sunday-@-The Segal is one of the most popular events on the theatre calendar. Join us for another season of intimate conversations, riveting lectures and memorable moments. Admission is FREE. All talks take place on the first Sunday of each run at 11 am in the Segal Theatre - seating is general admission. Coffee and refreshments will be served before the presentation.
Segal Centre for Performing Arts, 5170 ch. de la Côte-Ste-Catherine
-------------------------------------------------------------------------------------------------------
Presented by the Segal Centre for Performing Arts and the Dora Wasserman Yiddish Theatre, Sholom Aleichem: Laughter Through Tears runs July 8th to July 22nd, 2012.  To purchase tickets, call 514.739.7944 or visit www.segalcentre.org