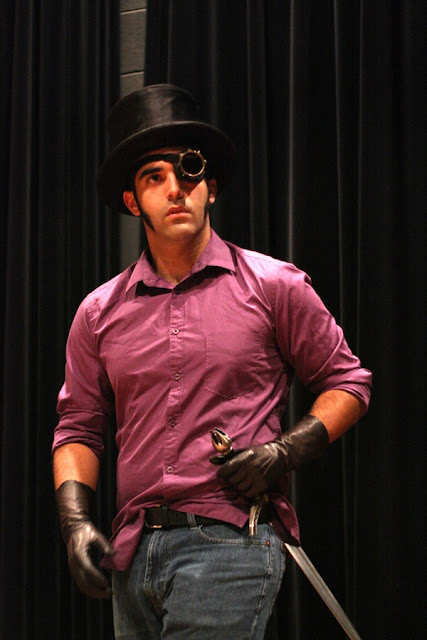 Rehearsal shot from The Tempest

One thing is made clear from the first scene of Kaleidoscope Theatre's production of The Tempest: this is not your usual Shakespeare. The aesthetic is undeniably steampunk, with gorgeous costumes and rock music interludes. The best part? It works! A style usually associated with futuristic dystopian landscapes actually makes sense within the context of a mysterious, magical island.
The plot of The Tempest is all about the magic. Prospero, the Duke of Milan, was usurped by his brother and has been marooned on an island full of spirits and magical creatures for 12 years. When his brother and the King of Naples sail by, Prospero raises a magical tempest and strands them on the island for some good old-fashioned repentance.
The high point of the show was its use of choreography and song

The Tempest has definite style and is worth seeing for the costumes. It's showy, flashy and loud, with great lighting and sound effects. The high point of the show was its use of choreography and song, which injected even more modernity into The Tempest and made its large cast of non-speaking characters an integral part in the proceedings.
However, it sometimes gets a little too showy for its own good, and overshadows the Bard's script. For example, in the opening scene when the real tempest takes place, I could not hear a single line of dialogue over the crashing of thunder, noises of the sea and the shrieking of the ship's passengers.
The Tempest features some strong performances, most notably from Morgan Nerenberg, delivering wonderful character and facial expressions as Sebastian, and Calder Levine, who brings some levity to the role of Ariel with a bright and cheerful performance. Annie Yao and Robin Kravitz were terrific as some of Prospero's subjects/island spirits. They communicate with each other and with the main characters using sounds and facial expressions and justify their inclusion in almost every scene. Before the start of the performance, spectators enter the room to Yao and Kravitz engaged in an intense game of chess, which ends with them throwing pieces at each other and putting others in their ears. It sets just the right tone of this Tempest; stylish but just a little bit silly. In my opinion, Yao and Kravitz were more fun than the actual clowns written by Shakespeare.
However, their scenes include the best use of a steampunk beer helmet I think I'll ever see.

These clowns, Stephano (Ben Houde) and Trinculo (Brett Seivwright) were amusing in their antics but eventually got to be a little too much. Seivwright had a habit of shrieking his lines, which was effective at some points, but was done a little too often. However, their scenes include the best use of a steampunk beer helmet I think I'll ever see.
The quartet composed of Tristan Roy, Scott Humphrey, Matt Lacas and Morgan Nerenberg as Alonso, Gonzalo, Antonio and Sebastian had some particularly nice exchanges in their frequent scenes together.
The lovers were typical. Lily MacLean's Miranda and Jonathan Dufour's Ferdinand don't really develop much character beyond the fact that they are two people in love. MacLean's performance was appropriately Disney princess-like, but too many of her lines were delivered in a crackling, hysterical voice that was difficult to understand because she was speaking so fast.
Zachary Creatchman's Prospero is appropriately commanding while remaining a sympathetic character. His only stumbling block is right at the end, when Prospero trades in his magic cloak for a fancy Duke's jacket. The problem is the jacket itself, which is ill-fitting to the point of distracting. The bowler hat fits with the steampunk aesthetic, but paired with the jacket, it gives the impression that Creatchman is about to break out into a Charlie Chaplin impression, instead of being in a position of power. As my play-going buddy remarked, “If you can make a suit your bitch, you can make everyone in the room your bitch.” Sadly, this was not the case. However, on the whole this was a very stylish, well-directed and modern performance of The Tempest.

Read director Trevor Barrette's first-person article on the creation of The Tempest.