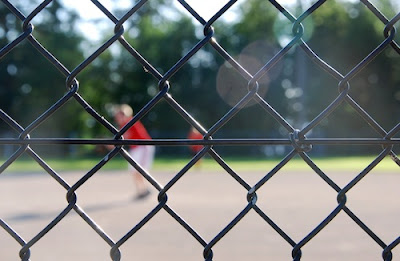 MONTREALERS AT THE BAT

joel fishbane
The Montreal English theatre community took a step towards glory this past Sunday with the first annual softball tournament, organized by the Quebec Drama Federation.
Eight teams battled it out at Laurier Park from sunrise until sundown where independent companies like Theatre Ste. Catherine and Sidemart Theatrical Grocery battled professional heavyweights like the Segal Centre and Geordie Theatre. Softball is not for the faint of heart, something which plenty of actors learned the hard way. Pulled muscles, scrapes and bruises abounded that day, with Dean Fleming, Geordie Theatre’s crackerjack artistic director, putting himself on the injured list halfway through the day.
QDF handed out several awards at the end of the day, including a Miss Congeniality Award to Geordie Theatre and the MVP Award going to Lynn Cosack of Scapegoat Carnivale. A spirit award also went to the newly created Metachroma Theatre – they didn’t have a team but they were the most colorful cheerleaders a softball tournament had ever seen (actor / director Mike Payette looked particularly fetching in a grass skirt.)
And the champions of the day? For the answer, we turn to the ghost of Ernest Lawrence Thayer. Famed author of the baseball ballad Casey at the Bat, Thayer resurrected himself to describe the final championship game between the Montreal Theatre Shakespeare Company and Sidemart Theatrical Grocery:

The outlook wasn’t brilliant for the Shakespeare fans' day
The score stood twelve to four with but one inning more to play
And then Ace Lopes died at home and walked away in shame
And iambic silence fell upon the Shakespeares of the game
They ignored the piercing heat, they ignored their sweaty scent
They ignored comic Mike Paterson who screamed “Shakespeare
is irrelevant!”
Then Alex Goldrich drove a single to the wonderment of all
And Aaron George, the captain, tore the cover off the ball
And when the dust had lifted, George hugged second to his chest
And there was Alex Goldrich with home base against his breast
Victory leapt closer as the score stood twelve to five
While in the stands the drunken louts all fought to stay alive
“Take me to the ballgame!” they sang. “Take me to the crowd!”
And on the field nine looks were fierce, nine players tall and proud
Here stood the folks of Sidemart, champs of indie theatre fame
Led by Andrew Shaver, they had vowed to win the game
Up came J.S. Elie, the bat a weapon in his hand
He hit a standing single - the finest in the land
And like the wind did Aaron George race his way past third
And stroll to home before the others knew what had occurred
From a hundred supple throats or more there rose a lusty yell
It rumbled through le parc, it hit the clouds in le ciel
It knocked upon the playwrights, it struck the actors flat
As Katherine “Mighty” Turnbull came advancing to the bat
There was ease in Katherine’s manner as she stepped into her place
And tears in Katherine’s eye as she popped out to second base
The score was twelve to six but the Shakespeares wouldn’t mope
As Number Seventeen stood up, his features hot with hope
Two hundred eyes were on him as he rubbed his hands with dirt
And wiped them on the shameless ad printed shamelessly on his shirt
He gave a mighty roar and it rose up from the heart
Like the gloried cry of one who was about to win the part
Seventeen watched calmly as the globe sped by his head
“Too high for me,” said he. “Strike one!” the umpire said.
“Kill him! Kill the umpire!” shouted someone loud and clear.
But who could be so cruel as to hurt a volunteer?
With a grin of simple charity, the batter took his stand
And quieted the angry crowd as he waved his artist’s hand
Once more the pitcher bent his knees, once more the spheroid flew
Once more it was ignored. And that was called “Strike Two!”
And now the actors rose in place and pumped their iron fists
The directors gave directions, the technicians booed and hissed
And Seventeen, he crouched and the audience was awed
He stood just like a temple; his face was like a God
And now the pitcher holds the ball and now he lets it go
And now the air is shattered by a single mighty blow
And now the ball it flies so high into the air
And now it’s caught with ease, with an almost stylish flair
Oh somewhere in this favoured land, the Bard still wins the day
In parks and out at Stratford, we know the thing is still the play
But in Montreal poor Shakespeare is not above the rest
Like the bed he left his wife, he’s merely second best
And Sidemart Theatre now they stand the champions for the year
“You don’t get here without sacrifice,” said Andrew Shaver with a cheer.
Then he pointed to their scrapes - which never might be healed
“We certainly bled our Sidemart Red across this bloody field.”
For more information about the Quebec Drama Federation, please visit www.quebecdrama.org.
Posted by THE CHARLEBOIS POST at 12:01 AM