First-Person: Trevor Barrette on The Tempest 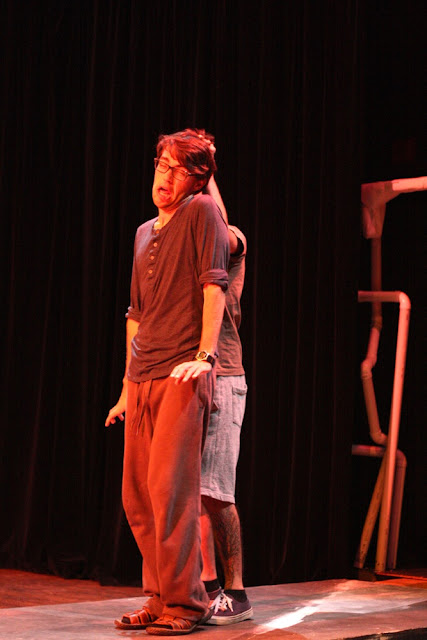 Kaleidoscope Theatre Montreal’s production of William Shakespeare’s The TEMPEST sets the Bard’s final masterpiece in the fictional world of Victorian Futurism. It is a world of contradictions, science and innovation where the old and the new collide and the line between dreaming and reality is never drawn. This dynamic and physical staging (produced, performed and designed in its entirety by current students and recent graduates of John Abbott, Dawson and Concordia’s theatre programs) will entertain and enlighten Shakespeare enthusiasts and newcomers alike.

The TEMPEST is the story of a man’s reflection on his legacy and his death. Twelve years since being marooned on an almost uninhabited island, Prospero, a powerful magician & the rightful duke of Milan, discovers the King of Naples’ fleet nearing his island. He summons a direful tempest and shipwrecks the King’s ship onto his island to force him and the usurping duke of Milan into repentance. Once on the island, history, as always, seems to repeat itself. Antonio, Prospero’s usurping brother, plots with the King’s brother to overthrow him and take Milan. Meanwhile, the King’s drunken butler and jester meet Caliban, a savage native of the island, who together seek to murder Prospero and claim the island for themselves. In another part of the Isle, Ferdinand, the King’s son, meets Miranda, Prospero’s daughter. The two fall in love and Prospero secures his place on the throne as Ariel, Prospero’s airy spirit servant begs for his freedom. There’s a lot going on. (cont'd) 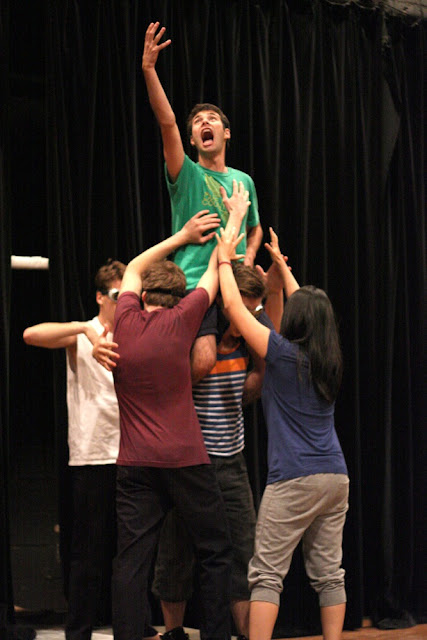 And that has been the joy of rehearsing and staging this play, it’s almost like a quadruple-bill. You could walk around the rehearsal studio and see the drunks stumbling over each other in the gabardine scene in one room, the King and nobles being tormented by a harpy in another and singing rehearsal for the betrothal masque in a third. It’s been a treat to see how these separate worlds are parallel and start to merge; it plays into the whole eclectic nature of the themes, designs and production. (cont'd) 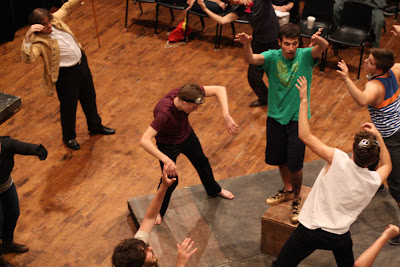 I became interested in directing The TEMPEST two years ago, after reading it in a History class. One of the main things that drew me to the play was the mutability of the characters. It seemed as though every time I read the play the characters would change, would become more or less relatable and I would always finish the play more intrigued. Even on the page, I felt that the characters were all very much alive and I wanted the opportunity to investigate them and their relationships further with a group of inspired artists who shared my fascination with them. I believe this curiosity about the play has manifested itself in the interpretation of the characters by the actors and in the storytelling of the entire piece. (cont'd) 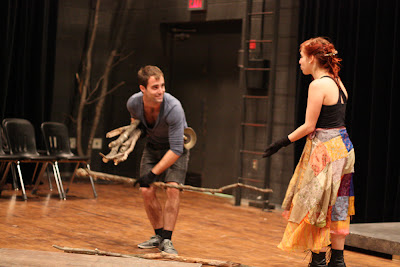 I always knew that we were going to strive to find the human nature in the play’s fairies and spirits and in the half-human/half-devil fish man Caliban, and approach them more like misunderstood beings, or disobedient children, than elementals. I didn’t realize how much this initiative would live in the play. In rehearsal, we began exploring this notion of discovery, the characters (fairies and humans alike) constantly exploring and finding their own human nature through observation. This, similarly to the cast and team's common curiosity, has become the spine of the production. 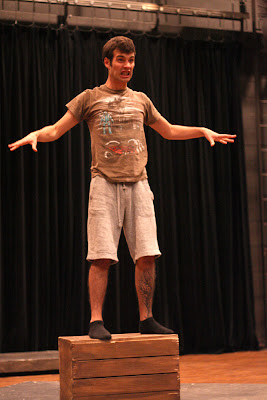 I try to approach rehearsal very organically and try to find the truth in the often “theatrical” moments of the play. Our TEMPEST is as much about the theatrics as it is about the tempest of Prospero’s mind. Finding the balance between the two has proven to be an exciting challenge. Prospero’s tempest is the humbling journey of a powerful, emotional man striving to find grace and humility and virtue in moments where vengeance lies at his fingertips. Shakespeare’s play is an intricate exploration of what it means to be human where all the characters find themselves in or seek to discover still, “a brave new world.”

Email ThisBlogThis!Share to TwitterShare to FacebookShare to Pinterest
Labels: the tempest, Trevor Barrette