Review: Taming of the Shrew 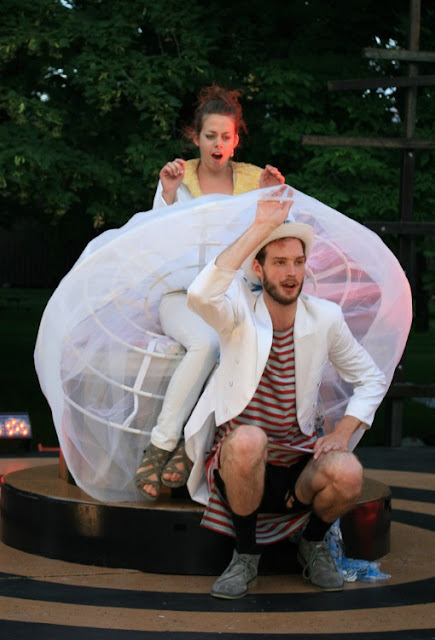 First there is the problem of the play
Can our critic get over the fact that Shrew is "egregiously outdated"?
by Jessica Wei

Sometimes you have to regard Shakespeare as your octogenarian grandfather at family dinners who likes to get bourbon-drunk and spout remarks less than 21st century politically correct that you kind of have to just smile and shrug through, like, “I'm pretty sure she was actually Japanese, and probably not a communist, necessarily, but then again you've been through a war and, y'know, can't teach an old dog new tricks, sooooo.....”
My point is, it is very difficult to enjoy Taming of the Shrew. It has its uncomfortable lulls. The political message hasn't quite transcended the five hundred years since it was written. Women with sharp tongues don't need to be “trained” anymore, especially not by gold-digging courters who have to run a business arrangement through rich old papa before sliding into first base. This is just a fact, and when one is slouched in a lawn chair at Mount Royal Cemetery, trying to enjoy this egregiously outdated play, one needs to first get over the fact that in Elizabethan England, sexism just didn't really exist.
this is not a socially progressive play, but it's Shakespeare

In Taming of the Shrew, the beautiful but boring Bianca is being wooed by three wealthy suitors who find out that she is unable to wed until her spunky older sister Katharina finds herself a husband, as outlined by their father. The only problem is that Katharina has built herself a reputation for chasing potential lovers away due to her spunkiness. So, the suitors find themselves a man who is more interested in money than love, who has a plan to tame the shrew (hence the title), and turn her into an obedient wife so his buddies can go ahead and try to win over the sister. Again, this is not a socially progressive play, but it's Shakespeare.
That being said, it's always a good idea to have the [arguably] most offensive character in Shakespeare's canon be performed by the most charming person, I'm convinced, ever. I'm serious. Alex McCooeye as Petruchio could give lessons to Don Juan on wooing a lady. Fred Astaire could learn a thing or two from McCooeye's fluid body movements. This guy simply melts on stage and beckons the audience to forget all the horrible things his character does like a piece of bitter chocolate in your mouth. His comic trade-offs with Matt Gagnon, who plays Petruchio's servant Grumio, are a delight to watch. His chemistry with Kirsten Rasmussen's fiery Kate in the first act actually gets the audience rooting for his success.
This all falls apart after intermission, however. The Bianca and co. subplot, carried by Miriam Cummings as the sweet little sister, Adrian Shepherd-Gawinski as her doting main man, with the assistance of Jeffrey Ho, Davide Chiazzese, Mitchell Cohen, and the hilarious Stephen Joffe, is entertaining but not spectacular. They make clever acting choices. They are talented and well-outfitted, but they are not fighting to extract as much comedy and tension as this play requires. When all the characters are kind of 21st century villainous by default, a romantic lead cannot simply shrink into the role of a watery pretty boy, and the audience should hate the shit out of the slimy old rich dude who thinks he can buy the heart of a young woman. Their story gets chuckles, but it doesn't inspire genuine passion or laughter.
As this is Shakespeare in the Park, their resources are limited. The directors Andrew Shaver and Paul Hopkins do the best they can with a small circular platform, and the pipe jutting out of the centre of it provides clever entrances and exits (thought not without some narrative confusion). All of the actors' body movements are dynamic on this simple stage and save for some marginal back-to-the-audience stuff, the staging is well-calculated.
And – okay – there's, like, a really uncomfortable scene at the end when some newly-married husbands have a bet with each other over who has the more obedient wife, followed by an even more uncomfortable monologue (something about women serving men with a “hand under foot”), but you know what? Don't worry about it. It's Shakespeare. And if you've got a free evening, an open mind, and a bottle of wine, why not spend it with Shakespeare in the park?

Playing at parks around Montreal to August 5
Posted by THE CHARLEBOIS POST at 3:55 PM

Email ThisBlogThis!Share to TwitterShare to FacebookShare to Pinterest
Labels: Jessica Wei, repercussion, Taming of the shrew