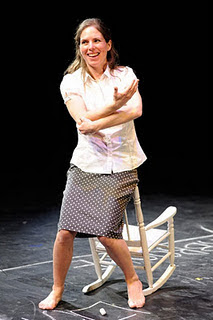 The Celebrated Solo...
and her brother...and a phone...
by Rebecca Ugolini
Johanna Nutter’s celebrated solo piece My Pregnant Brother has its roots in the familiar. Standing barefoot before the audience and wielding a piece of chalk, Nutter recounts her nomadic and free-spirited childhood as she traces street names onto the black floor of La Chapelle’s performance space: Boulevard St. Laurent, Avenue Mont-Royal, Avenue du Parc. From those well-worn Montreal streets, My Pregnant Brother sets off to explore territory that is, if not uncharted, then still mostly unknown and misunderstood: transsexual identity, body politics and the dynamics of an unconventional family.
At first glance, My Pregnant Brother is a piece about the difficulty of people who identify as transsexual to find acceptance in their families and to traverse the world of hospital appointments, gender-specific pronouns, and society’s conventions with a sense of normalcy and dignity. As a piece which portrays those struggles with sensitivity and humour, but doesn’t pull any punches, My Pregnant Brother is a triumph.


If you haven’t seen My Pregnant Brother yet, you should get to the theatre while you still can
Montrealers used to seeing Nutter on stages across the city know why the actress is so well-loved. She manages to do what most good theatre is supposed to do merely by the presence she exudes on stage: she puts the audience in a strange limbo between ease and tension, between the comfort of the familiar and the knowledge that, at any moment, the unfamiliar may strike.
Nutter’s magnetic stage presence serves My Pregnant Brother well, as it’s also a piece about how a woman who has been the pillar of her family since she was a young girl learns to draw boundaries and define herself outside of the cage which her family’s neediness and dependence has built. My Pregnant Brother is a poignant piece for women, one which tackles the issues of motherhood, guilt and infertility.
Zoofest audiences are in for a treat if they land on one of the play’s French-language nights, as Nutter is fully fluent in both English and French, and injects additional humour into her lines with her spot-on Québécois phrasing. If you haven’t seen My Pregnant Brother yet, you should get to the theatre while you still can: although it’s a highly successful piece, Nutter herself has stated that she feels the need to explore new territory and new, scary theatre experiences. It’s the mark of a great actress, one who wants to keep evolving and growing—so you might not have much time left to catch this one on stage.
(But, as a side note, if you do: please turn off your cellphone. Last night’s show was interrupted twice by the same person in the middle of the room’s right-hand side with the requisite irritating ringtone, and frankly, the entire audience felt the awkwardness that this introduced into an otherwise excellent showing. There’s just no excuse.)
Read an interview with Johanna Nutter
Ticket info
Posted by THE CHARLEBOIS POST at 3:28 PM