Opinion: On The Training Ground and Hamlet 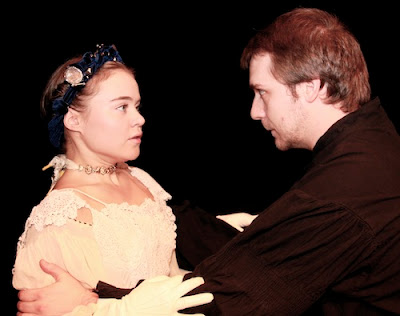 The Folly in Youth
by Nanette Soucy
@NetSoucy

Montreal is home to at least half a dozen theatre programs. Consequently, its relatively small Anglo theatre scene is inundated with recent grads in search of challenging work to build up their résumés and hopefully pay the rent. With an arguably educational mandate, several local companies have elected to meet this demand for work by choosing to work almost exclusively with erstwhile students, offering them opportunities to perform roles they wouldn’t otherwise have been cast in.

I must confess, I am past the point in my career when I could reasonably refer to myself as a “recent graduate” of my Alma matter. But I am only so far along that the bulk of my working experience is with companies that value employing emerging artists as a matter of mission and method. As young artists, we are all grateful for the existence of these companies to a point. Yes, we can say we held a major role in a classic piece of theatre, that we might not have otherwise been cast in for lack of experience, or because we simply weren’t right for it. Yes, we can say we’ve gotten paid work, but at what cost? Let’s be frank. Companies who choose to employ recent grads, however altruistic their intentions, do so in large part because they are willing to work for cheap, and are invigorated by youth to work hard.


Its recent production of Hamlet is saved by the simple fact that it’s Hamlet, and Hamlet is the perfect play.

There are a number of consequences to hiring the young, enthusiastic, impassioned and inexpensive. The most important one, to those hired, is that although they are just being paid token amounts, the hours they have to put into their performances vis-à-vis professionals remain the same. Since their honorariums are so small, they have to keep a day job, often full-time in order to keep fed. Invariably, something suffers. Be it the actor’s nutrition, Hydro balance, sleep cycle, or performance on stage and at work. Often all of the above.  And what do young artists learn from such experience? That burn-out is common in the arts. How badly burning out sucks. What a drain it is on your life, on and off the stage, and most importantly, that it’s difficult to pull off an award winning performance of a challenging classical work when you haven’t slept properly or eaten a vegetable in weeks, and you don’t yet have the chops, but do have the right physical type for a given role.

Persephone Productions is one of these companies. Its recent production of Hamlet is saved by the simple fact that it’s Hamlet, and Hamlet is the perfect play. There’s love, ghosts, madness, revenge and murder. The plot is engaging, the language is beautiful, the rhythm is familiar, and we are willing to forgive a lot of forgotten, poorly delivered lines, crooked carpentry, and costumes held together by safety pins, because as audiences, we’ve been told that Hamlet is “Challenging Work”, and we’re happy to sit and wait for our favourite lines to pass someone’s lips, clap politely at the end and marvelling at the hard work the actors put in. This was highlighted in Director Gabrielle Soskin’s plea for us to purchase raffle tickets, underscoring a need for funds, and the cast and crew’s hard work in the face of requisite day jobs, as if apologizing to her opening night audience for the tired, unpolished, and often dead-eyed performance we were about to see. As if to say, we’re all working very hard, and we’re all exhausted and hungry, so go easy on us please. When coming from an emerging company, headed and founded by recent grads, these pleas might be forgivable. For a company with over 10 years of productions under its belt, it’s unbecoming.

Yet, we buy the tickets and we attend, not because it’s good, but because exposure to culture of this kind is good for us, and we want to be supportive of young artists, which is also good for us. The audience gets its dose of vitamin art and mineral altruism at the expense of the literal nutrition of the young artist. By fulfilling their appetite for experience and taking advantage of their willingness to sacrifice for their work, we teach them to romanticize starvation as artists, rather than enabling to work for what they’re worth, and supportively exploring their full potential.

Hamlet continues to November 18
Read Christopher Moore's first-person on preparing for the role
Posted by THE CHARLEBOIS POST at 5:56 PM