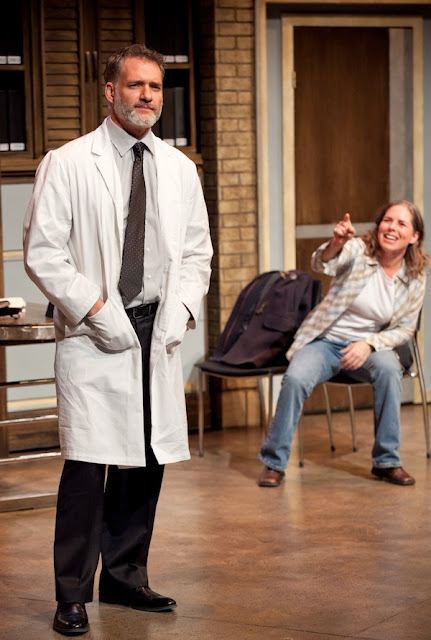 Paul Hopkins and Johanna Nutter (photo credit: lucetg.com)
Southern Comfort
by Rebecca Ugolini
@RebeccaUgolini
Good People aren’t hard to find, but it might be hard to say how they’re forged. In the hard-up neighbourhood of South Boston, a single mother, Margaret (Johanna Nutter), struggles to find work after losing her job. Left with bills to pay and a mentally-handicapped adult daughter to support, Margaret acts on her friend Jean’s advice (Catherine Lemieux) and asks an old flame for help. As the gap which has grown between Mike (Paul Hopkins), who is now a doctor, and Margie becomes apparent, Good People deftly explores issues of social class, economic disparity and personal choices.
Nutter spent some time in South Boston, simply referred to as Southie by its residents, and it shows in her performance. Her accent is spot-on, and her gait and weary mannerisms communicate a femininity that has been worn-down by years of hard work and disappointment.


from ugliness and hardship, beauty can unexpectedly be born
It’s Catherine Lemieux who steals the show, however, providing both comedic relief and moments of tenderness as Margaret’s tough-talking, but protective best friend.
Good People’s characters are all that way—as real as Southie itself. Paul Hopkins and Kim Nelson are entirely believable as Mike and Kate, a couple whose strained relationship is a tangle of high-class parties, relationship counselling, and an unspoken difference in socio-economic background. Margaret’s landlady, Dottie (Sandy Ferguson) is a tight-fisted older woman whose self-interest despite Margaret’s tough circumstances makes her the object of Jean’s frustration, while Stevie (Karl Graboshas) is a good-hearted dollar store manager caught between firing Margaret from her job for lateness, and risking the loss of his own job in Southie’s rough economy.
Fascinating stage design by John C. Dinning makes Good People even more of an immersive experience into Southie. Dumpsters from the first scene open up and become a kitchen counter for the second scene, and outdoor features flip down to become the desk in a swanky doctor’s office. The visual cleverness plays off of Good People’s central theme; from ugliness and hardship, beauty can unexpectedly be born. There are few hard criticisms of the play to be made: a few blips occurred on opening night, but they were minor.
The Centaur’s production of Good People is the play’s English-language Canadian debut, a good opportunity to see a work that will likely be produced again and again if the reaction of last night’s crowd is any indication of its coming popularity in Montreal. Take the T and get back to Southie, and meet yourself some Good People.
Good People continues to December 9
Posted by THE CHARLEBOIS POST at 6:24 PM