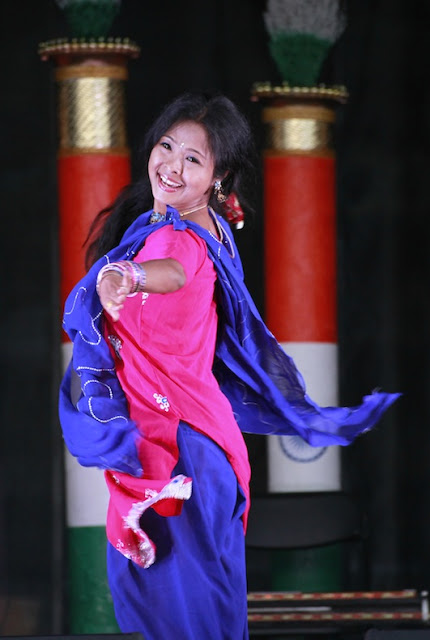 Gold Dust
by Caitlin Murphy
The season’s first snowfall was serendipitous yesterday, at least for one local theatre opening.  Satrangi, written, directed, choreographed and performed by Deepali Lindblom, implores Montrealers to come in from the cold and move toward the light:  “7 Stories of Light” in fact.  And though the show offers a bright, cozy atmosphere and some delightful Indian dance, all that glitters isn’t quite gold.
The production quickly serves up several visual treats: the set, created by Claire Renaud and Charlotte Hoffman, is compelling in its simplicity: colourful sheaths of fabric are elegantly draped, and strings of twinkly lights gracefully hung to create a highly inviting proscenium in the Bain St. Michel. Alycia O’Keefe’s lighting design is inspired and evocative; and the many shiny, flowing, adorned costumes (changed often) create kaleidoscopic effects.
Satrangi’s theme felt too ill-defined and vague to act as a successful through-line

Satrangi in Hindi means rainbow, which speaks to the show’s concept: seven stories (inter-woven with dance) working in tandem like the colours of the rainbow.  A lovely premise, but Satrangi’s theme felt too ill-defined and vague to act as a successful through-line that could hold a piece – especially one that combines dance and narrative – tightly together.  The stories quickly became predictable in their sentimentality and their delivery sometimes felt a little glib.  Some potentially very resonant issues – the phenomenon of skin lightening in India, for instance – felt conveniently reduced to arrive at a generalized ‘everything turns out well in the end’ theme.
Lindblom’s expressiveness is best served in her dancing where she truly shines, and the authenticity of her training and technique are quickly appreciated.  But it’s less effective in the storytelling where she shows a tendency toward over-emphasis and gestural punctuation that could rival Celine’s.  After a confusing false ending, Satrangi’s final story recounts how Lindblom met her Swedish husband and is capped with a projection of their wedding photo – a moment that steered a little uncomfortably into vanity project territory for this viewer.
As performer and ring-leader, Lindblom is confident, ebullient and clearly a born show-(wo)man.  In this tour de force though, I feel she may have taken on too much.  Writing and directing the piece herself, Lindlbom missed some dramaturgical opportunities to enhance her own work:  giving her four accompanying dancers more to do could have added dynamism and variety to the narrative sections; cutting some of the projected videos (sometimes included only to facilitate costume changes) would have bolstered coherence; and trimming about 15 minutes from the running time would have added punch.
So, yes, all that glitters isn’t gold – but it still glitters.  And sometimes, especially round this time of year, that’s enough.
Satrangi continues to December 9
Read also Deepali Lindblom's first person piece about her journey
Posted by THE CHARLEBOIS POST at 3:41 PM