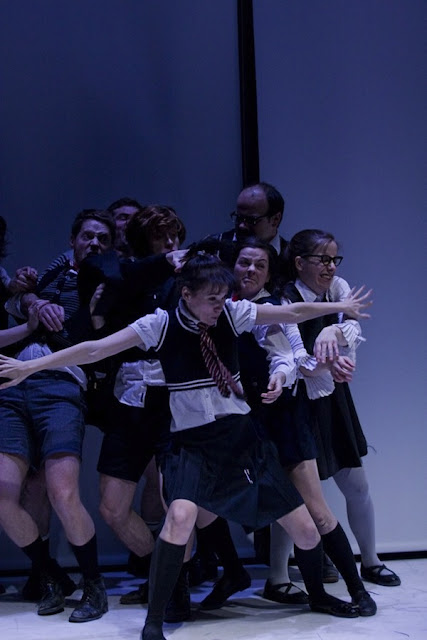 The Lesson
Les Mutants is everything...
by Gaëtan L. Charlebois
@gcharlebois

It's a Thursday evening, curtain is 7pm, and the house is packed with precisely the kind of audience every artistic director dreams of: young (in their late teens, early 20s), respectful, and open to a new experience. To this non-opening-night crowd - as revealed by the standing ovation at the end - this was a new experience.

The actors - all seasoned hands including the delightful Sophie Cadieux who co-conceived the show - were bursting with energy. They sang, they danced, they even played instruments. Dressed in school uniforms (c. 1958), they illustrated the evolution of Quebec with a series of important pamphlets and speeches (for instance, Le Refus Global), poems (one from Leonard Cohen), clips from documentaries, scenes from movies, and a vast array of snippets with, as general theme, cultural strength and - yes - nationalism.

Indeed, it was a real SnippetFest and as the actors bounced off the walls and performance style went from very serious, to school-yard antics to gleeful cheering, it also became clear that all those calories were being expended on a shadow of a play, a jumble of ideas none of which ever gelled. It became glaringly clear that the piece, in trying desperately to cover up its roots in agit-prop, was suffering all the woes of second-rate collective creation: aimlessness, thematic blur, and - despite the wattage - tedious repetition.

What became clear - and perhaps this was the point - is that Quebec, as a culture (and since the Quiet Revolution), cannot be pinned down and can only be truly defined by the aspirations suggested in the walls of text brought forward during the evening.

What must be said, however, is that the new spaces at La Licorne are finally being tamed by designers and Évelyne Paquette's set and André Rioux's lighting, especially, are object lessons on making a small space not just viable but exciting.

Perhaps, I thought during the standing ovation, this is not aimed at me. Perhaps it is aimed at young people who will buy into the dogma being sprayed about and won't look at it anymore closely than they look at the crap churned out by Loco Locass (who, needless to say, are also cited during the piece). Perhaps that energy and the pedagogy, which is pretty much all there is to Les Mutants, is enough. Fine, I suppose. But shouldn't we also be giving a packed house of such open, receptive minds something more?

Les Mutants is at La Licorne to December 1
Posted by THE CHARLEBOIS POST at 9:32 PM