First-Person: Joseph Shragge on The Heretics of Bohemia 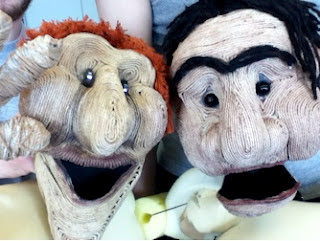 Dramaturgy of Disappointment
Failure in the Face of Comic Expectations
by Joseph Shragge
"Humor, I suppose, consecrates nonexistence." Lionel Abel, Metatheatre:
a new view of dramatic form
The moment genre is invoked, expectations emerge. The process of dramaturgy for our upcoming play The Heretics of Bohemia consistently raised the question, “what is this?” Knowing the piece was a comedy didn’t help specify what kind of comedy it was. For a period I thought of it as a turn on festive or Saturnalian comedy, outlined by the critic C.L. Barber as, “Release expressed by making the whole experience of the play that of a revel.” This genre raises the expectations that social hierarchies will invert, and that all the energy put into maintaining inhibitions will be released into misrule, play, and a flight from the self. Trying to achieve the glorious freedom of this idyllic vision of life, I buckled. Trying to revise the text with the comic expectation of enjoyment met with unhappy results. When a character experienced a loss of self, it was unsettling; excesses and intemperance, produced guilt and dread. Instead of liberation, more energy was needed to maintain the exact inhibitions that the genre promised to allay.
It has an odd effect seeing people apologize out of structural necessity.

The next attempt was to mold the play into a tragicomedy. Guarini’s 17th century essay, “Compendio della Poesia Tragicomica” extols the value of mixed-genre, where a somewhat convoluted plot with alternating scenes of tragedy, comedy and shepherds, ends with a danger averted, a scene of forgiveness and the purgation of melancholy. The Heretics did have danger averted, so seemed to fit. I just had to make all the characters apologize to one another in a tearful scene of reconciliation. It has an odd effect seeing people apologize out of structural necessity. Melancholy was not purged and all the characters secretly hated each other.
Eventually even the idea of the play being a comedy was dropped. All conscious attempts at humour fail precipitously. There was no liberation and no forgiveness, but a general feeling of exhaustion, and shame at disappointing expectations. Mercifully, as rehearsal began, Zach Fraser’s puppets lifted the waning morale of the project, and Alison’s direction was not about finding comedy, but understanding the world itself; how does it change and why? The cast, made up largely of comedians and comic actors weren’t interested in what genre it was, if any.