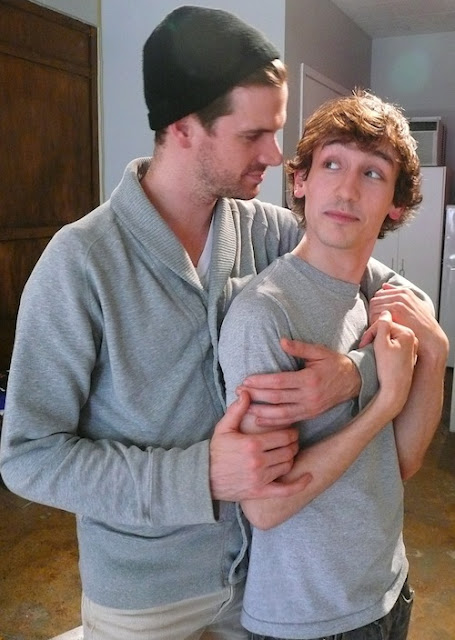 SHAKESPEARE MUSICAL PORTRAYS GAY STUDENT'S ANGST
By Byron Toben
“In how many ages hence shall this our lofty scene be played many times over in States yet unborn and accents yet unknown” is my favorite Shakespeare quote. How much do musical adaptors love Shakespeare? Let me count the ways. Aside from hundreds of operas, there are dozens of flops and four hit musical shows based on one or the other of his plays. (See which ones below). They all have a minimum of Will's text due to the space taken up by the composers' orchestrations.
As befits an involved experimental production, many of the cast are recent grads of the Dawson theatre program as well as John Abbott's

Now along comes Trevor Barrette, a 20 year old recent grad of John Abbot's Theatre program, who has written the book and lyrics (as well as collaborated with two others on the music) for “To Be”. The quotes are not just from Hamlet, but from the Complete Works of William Shakespeare.
Barrette might not have seen this production mounted but for the dedication of Persephone Productions headed by Shakesfan Gabrielle Soskin, who  brought director Christopher Moore into the mix. The cast of eleven is aided by a five instrument band and the whole is squeezed into the Rialto's still-in-construction basement theatre which holds about 80 spectators.
As befits an involved experimental production, many of the cast are recent grads of the Dawson theatre program as well as John Abbott's and have been seen in recent small theatre shows such as Reefer Madness, Far From The Madding Crowd and A History of The Devil.
The juxtaposition of classic bard quotes with a modern scene (complete with cell phones) is managed smoothly.

Now to the play, which is, after all, the thing.
The basic plot is that Adam (played by Barrette), an English Lit student, is burdened by the recent death of his father (Chris Nachaj), a famous professor who he was not close to. While night life-ing with his more outgoing cousin, Benny (Ian Geldart), he finds himself in Montreal's Gay Village on a lark and meets Sebastian (Christopher Hayes) and they slowly end up as lovers, despite Adam's fear of being labeled “a great gay guy” which drives him to contemplate suicide.
The juxtaposition of classic bard quotes with a modern scene (complete with cell phones) is managed smoothly. Dream sequences about creatures of the night are overseen by a drag queen (James Harrington) Some bits were somewhat campy (not that there's anything wrong with that) and the musical numbers contained a variety of serious and catchy chords.
I found myself distracted trying to remember which Shakespeare plug-in quotes were from which of his plays. Hamlet, Romeo and Juliet and Midsummer Night`s Dream seemed to predominate. I  believe there was one from Julius Caesar (the source of my opening sentence above).
All in all, a must see for serious Montreal theatre fans, but not to everybody’s taste.
Oh yes, the four big musical hits until now:
The Boys From Syracuse - Rodgers and Hart 1938 based on The Comedy of Errors.
Kiss Me Kate - Cole Porter 1948 based on The Taming of The Shrew
West Side Story – Laurents, Bernstein and Sondheim 1957 based on Romeo and Juliet
The Lion King - Elton John and Tim Rice 1997 based on Hamlet
TO BE continues at the Rialto until May 5. Call 514-770-7773
Posted by THE CHARLEBOIS POST at 4:16 PM