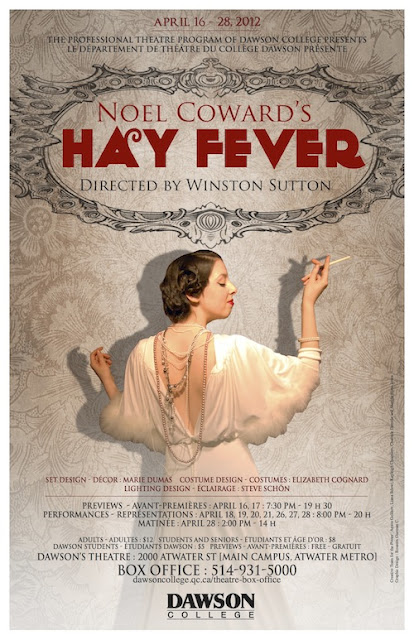 Mother of a Play
Upstage and Charlebois Post contributor Sarah Deshaies spoke with actors Chantale Demole and Adam Capriolo about their roles in Hay Fever by Noel Coward being presented by Dawson Professional Theatre Program.  Below is an abridged version edited by Estelle Rosen, CharPo Editor-in-chief.
UPSTAGE:   Tell us about  Hay Fever.
CHANTALE:  It takes place in England in the 1920s during a weekend with an eccentric family. My character, Judith, is a retired actress and even though the family know what she’s like, anything can happen. You can expect when she’s going to have a temper tantrum, the family doen’t handle it well at all.  They love each other but they’re pretty crazy. Each of them invite a guest for the weekend. They all swap lovers for the night.
ADAM: Basically they’re all putting on a show for their mother. They know she loves  over the top dramatic action. She thrives on the drama.
Not only  does he feed off his mother, but without realizing it, he too goes on these over-the-top dramatic rants which he thinks is fun.

UPSTAGE:
Did you have to dig deep Chantale to get to that inner diva?
CHANTALE:  The process for selecting plays for the entire season happens during the summer. Our Director Winston Sutton had emailed the scripts to us.
When I read the script, that character spoke to me. I adore Kristin Wigg on Saturday Night Live (SNL)  and I took a lot from her. The two matched up and made sense to me.
UPSTAGE: I can just imagine you doing homework; watching SNL telling your parents this is for work.
CHANTALE  One of  Kristin Wigg’s characters is where she’s at a party. A guest asks this man to play the piano for the guests at the party. Out of  nowhere Kristin says don’t ask me to sing. She was never asked to sing. That  inspired me to get hold of Judith’s character.
UPSTAGE: Adam you play Simon, Judith’s son.  How does that work with Chantale’s character?
ADAM:  We all feed off the drama of Chantale’s mother character a lot of the time. I’m also very much into SNL and British comedy which has a lot to do with the show. It also helps getting the Brtish style correctly. It’s such fun to play Simon. Not only  does he feed off his mother, but without realizing it, he too goes on these over-the-top dramatic rants which he thinks is fun.
We all have plans; it’s just a matter of making it happen for ourselves.
UPSTAGE: So now that you’re finishing up at Dawson, what are your plans?
CHANTALE:  It’s hard to plan because it depends if you get lucky and you land a role. That’s what’s so scary. Thrilling and fun but basically waiting to see what comes my way.
ADAM:  I applied to Concordia Theatre Department and auditioned for National Theatre School. If I don’t get in I want to try and find work in theatre. This summer I’m doing a show at the Segal Centre. We’ve toured for the last two summers, now it’s going to Israel.
UPSTAGE: Is there a sense of apprehension along with the excitement among students in your class?
CHANTALE:  Most are going back to school. A lot have auditioned for theatre schools. We all have plans; it’s just a matter of making it happen for ourselves.
ADAM:  We have really good teachers who are very hepful and preparing us very well. Many of them have made themselves available to us if we need to be in touch for advice or whatever.
Information website
Posted by THE CHARLEBOIS POST at 12:01 AM