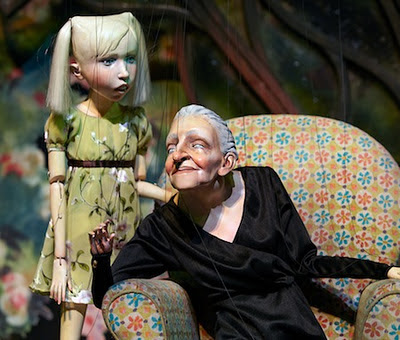 SOME GUY AND HIS DOLLS
Ronnie Burkett and the Theatre of Marionettes
joel fishbane
“Life is finite,” says master puppeteer Ronnie Burkett. “I’m just killing us off at once.” The remark perfectly captures both his wit and sincere concern for the future of civilization. “We’re on a collision course…anyone who says we’re not is an idiot.”
I’ve managed to catch up with Burkett over the phone as he’s finishing up his Canadian tour for Penny Plain, the latest production from Theatre of Marionettes. The subversive bad boy of puppet theatre since 1986, Burkett has gained international acclaim creating sophisticated theatre involving puppets, all of which he designs himself. The shows consistently marry absurdity with some startling explorations about the human condition.
The world is incredibly joyful and sad on any given day


Described as an apocalyptic drawing room comedy, Penny Plain has been drawing rave reviews from across Canada. The story concerns the trials of its eponymous heroine, a blind octogenarian whose agoraphobia appears to be well-deserved: the outside world, as she soon learns, is swarming with survivalists, talking dogs and cross-dressing financiers. The synopsis is quintessential Burkett, who often uses broad humor as a sugar pill for more profound ideas. “The world is incredibly joyful and sad on any given day,” he tells me.

Being a writer myself, I can’t help trying to mine him for clues about his methods. Here the secret of his success shines through: Burkett always begins with a script and spends up to a year holding private readings in which he plays all the parts himself. The actual actors – Burkett’s marionettes - are not in the room, forcing the story itself to take centre stage. He also makes use of his long-standing relationship with Iris Turcotte, Canada’s wunderkind of a dramaturg, who currently works as the literary manager at Toronto’s Factory Theatre.
Each project has its own vocabulary


“Each project has its own vocabulary,” he tells me. “Some are their own beasts.” In the case of Penny Plain, Burkett soon realized that in a play about the end of the world, the world itself would have to be part of the dramatis personae. The set of Penny Plain is just one of the many characters in the play – and there are more then 30, all of which Burkett performs on his own.
Burkett’s method may seem obvious from a theatrical perspective but for the world of puppetry, it’s actually quite novel. Puppetry, he tells me, is often treated as a non-verbal art and students are rarely taught how to write for puppets. Burkett believes puppet theatre needs to be a writer’s theatre and to this end he has started teaching, hoping to encourage students to integrate the text with their creations.
Burkett’s attraction to puppetry came when he was young – he describes it as having “this stupid notion to play with marionettes, followed by the audacious notion to do it for adults.” He was notorious for writing to other puppeteers and taking apprenticeships with those who wrote back. This was how he came to work with Martin Stevens, the famed American puppeteer who was instrumental in advancing the art of puppetry throughout the latter half of the 20th century.
Burkett’s art has few parallels in Canadian theatre and he admits that his type of work will probably leave when he does. But he remains optimistic about the future of puppet theatre as he believes modern audiences seem more willing to accept it than ever before. “There’s great appeal in walking into a dark room and getting an acoustic performance, a shared experience,” Burkett says. “It’s becoming rarer in the isolation of the digital age.”
Puppetry has always been a subversive art - even the Muppets were iconoclastic when they first emerged – and Burkett is determined to see that it remains the “low folk art” that it has always been. “[Puppeteers] will never get the Order of Canada and we shouldn’t want it,” he quips. “In the end, I’m just some guy and his dolls.”
Penny Plain by Ronnie Burkett is currently finishing a cross-Canada tour in Montreal from April 12 – 21 at the Cinquième Salle of Place des Arts. For tickets call 514.842.2112 or visit laplacedesarts.com.
Posted by THE CHARLEBOIS POST at 12:01 AM