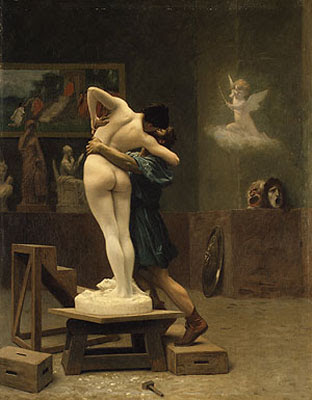 Not Shaw's Pygmalion, Not My Fair Lady
Rameau's masterpiece comes to Montreal
by David Menzies
About the Collectif Baroque Mont-Royal
Collectif Baroque Mont-Royal is Montreal’s newest vocal-instrumental ensemble focusing primarily on baroque and classical repertoire. Our passion is to discover and perform early operatic and instrumental works. The company was founded by Susan Toman, harpsichordist, and myself, David Menzies, tenor. We met while we were completing Doctoral studies in music at McGill University’s Schulich School of Music.
Our Inaugural Project

Our first production is Jean-Philippe Rameau’s opera-ballet Pygmalion.  The opera will take place at the historic and beautifully restored Rialto Theatre on du Parc Avenue, one of the most iconic buildings in Montreal. Upon entering the theatre, the spectators will be greeted by chandeliers and elegant gold filigree that lend a baroque tone to our production.
The audience will have a choice of sitting in regular theatre style row-seating, or at round cabaret tables while sipping a beverage of their choice. The Rialto’s in-house chef will offer delicious hors d’oeuvres to accompany a pre-show vernissage (art exhibit) featuring newly created works by the Quebecoise artist, Geneviève Chevalier. These sculptures were especially created for this production and were inspired by the theme of sculpture and creation of art within the opera.
What makes an opera-ballet special?
Before there was fully sung opera, there was more likely to be a show that featured instrumental music and dancing.  Singing was added later on.  Opera-ballet is special because it is very closely tied with France and the monarchy, combining lovely vocal music and dance.  Our company has the privilege and pleasure of featuring one of North America’s leading experts on period baroque dance- Marie-Nathalie Lacoursière.  She will be choreographing and dancing with her Montreal-based baroque dance company “Les Jardins Chorégraphiques”. They will be featured throughout the performance, in keeping with the traditions of French baroque opera, offering an elegant nod to the past.
What do we hope our company accomplishes?
Presently, our main goal is to offer to the Montreal arts scene rarely seen and heard chamber opera from the baroque and classical periods.  The works we choose will purposely be short- Pygmalion itself is not a “grand” opera, and will not last for four hours!  Modern audiences want a visual and aural experience, but have a lot in their busy lives.  Other early music ensembles in Montreal produce chamber operas from time to time, but this is so sporadic that we really feel we can fill in a gap in the city’s vast arts scene.  We plan to produce one fully staged chamber opera (or adaptation of a full opera) per season with orchestral accompaniment.  This also differs from many other vocal groups that feature keyboard as the sole accompaniment.  In 2012-2013, we have an already very ambitious season planned, with an opera and two instrumental-vocal concerts.
Finally, there is a large gap between student and professional performers here in Montreal – a gap that must somehow be bridged.  Schools and conservatories are churning out students, but the opportunities available are dwindling with budget cuts, etc.  We would like to provide a platform for these skilled performers and provide further mentorship and performance opportunities to help these emerging early music artists, who are already working professionally, to further succeed in their careers and gain the stage time that is so crucial to their artistic development.
Why Pygmalion?
Pygmalion is a wonderful myth, based on a short tale from Ovid's Metamorphoses. It was a special story to many artists and composers throughout the ages, appearing in opera form in virtually every musical period, and of course in theatre.  The work centres on the transformation of a concrete art object, the statue, into a living human. A metaphor for any arts group, it is fitting to use this opera as our inaugural project.
What is the synopsis of this opera?
The story is based on the myth of Pygmalion from Ovid's Metamorphoses. In the version of Rameau and librettist Ballot de Sovot, the sculptor Pygmalion creates a magnificent statue and falls desperately in love with it. Pygmalion's living lover, Céphise, accuses him of abandoning her, but Pygmalion only has eyes for the statue and implores Venus to cure him of his impossible desire. The goddess of Love descends and gives life to the Statue, who comes to life slowly. While the Muses surround the Statue and teach her to dance, the goddess of Love commends Pygmalion for his talent. The people at the scene all sing and dance to celebrate the honour of Love and her power.
The work is short, will the audience hear something else?
Since the opera-ballet itself is 45 minutes long (as many were in its day) we have chosen to create a short prologue made up of selections from Les Indes Galantes, including instrumental pieces and dances that will feature Marie-Nathalie Lacoursière and Les Jardins Chorégraphiques. This is in keeping with the Baroque aesthetic, but also references modern popular music concerts that feature a "pre-show".
Is Rameau particularly demanding for the singers?
Rameau is an highly gifted vocal composer, and was well aware of what singers of his day were capable. His music beautifully marries French declamatory style with Italian lyricism. That being said, he makes special demands of the tenor singing the role of Pygmalion (a voice type known in French baroque opera as haute-contre or high tenor). The soprano roles are demanding in that they require a constant declamatory quality requiring vocal flexibility, as well as surprising bursts of coloratura.
Does baroque dance and modern staging make a good marriage?
Most certainly!  Very few groups have the luxury of combining excellent period dance with modern stagecraft. Rather than allowing ourselves to be limited to a completely “period” interpretation, which would have required elaborate sets and costumes, these practical and aesthetic reasons led us to combine the best of baroque extravagance with modern elegance.
Information at the Rialto website
Posted by THE CHARLEBOIS POST at 12:01 AM