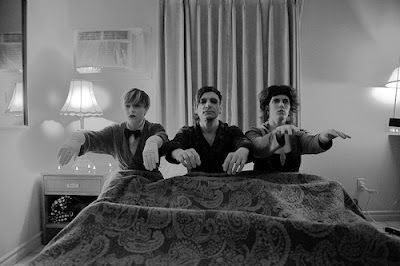 Sleepwalkers from Les Yeux Oranges
Part VI: Wrap-Up
by Crystle Reid
These days with the Vancouver Playhouse Theatre closing and Siminovitch Awards on the way out it feels like any act of creating and watching live theatre is one of resistance. And last month at ArtHostel! resist we did. Many artists came out and transformed the hostel, for a few hours, into a vibrant art community.  The sheer quality and ingenuity of their pieces impressed me. There was a really wide array of work.

Les Yeux Oranges presented a Sleepwalker’s Operetta, a haunting meditation on dreams.  In the basement we had some ArtHere! first-timers Poécirque performing a circus piece about two camels in the desert looking for a Dep.  It was transfixing.  There were at least two audience members who went to see it 3 times.  Downstairs we also had the Astra Sundae Bar where one guest at a time can make a sundae under the watchful eyes of two security guards.   In the electrical room there was an unsettling installation by local actress Natasha Perry Fagant.   On the second floor All the Fixins Theatre had a toy theatre piece that was heartbreakingly beautiful.  Next to them Jing Ju Canada was performing an extraordinary and moving water sleeves dance.  Down the hall Aural Turpitude was creating a music video for the dirty and hilarious “Stanky Puss” song.  I’m sure the creation will be hitting a YouTube channel near you soon.  Anne Sophie Grenier’s Vaudeville Hall of Freaks was there to delight and horrify.  Scott Humphrey presented a frantic contemplation on the act of creation.  Back down on the main floor C’est La Vie had a listening room for their podcast plays and the stand-up comedy room was back with a hilarious group of comics.  In the main space Luke Fowlie was spinning danceable music all evening long.  It was a full night and I haven’t even mentioned the visual art room or the Cheap Art table.  I left with a renewed sense of faith in what I do.    (cont'd) 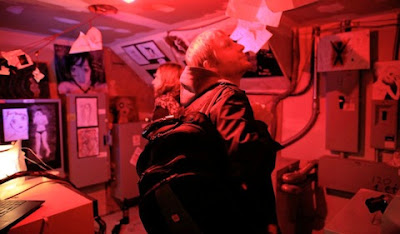 Natasha Perry Fagant installation
I do these events because I love them. At the end of the day all you can hope for is that other people will love them too. One of the neatest segments of audience are the people who don’t know us, but come to discover something new, that gets me so excited. Which got me to thinking: “How often do I go out to see art that I know nothing about, just to check it out?” The answer is not enough. It’s so much easier to head home and just watch TV (especially when it’s cold!). It would be way more awesome to get out and participate in local culture that I have more connection to.  There is also the idea I suggested at the beginning, of live theatre being a form of resistance.
What exactly is it that I’m resisting? Becoming a dead culture. Becoming a culture where the only art that exists is there to promote a product. I know it sounds like a crazy science fiction movie but lately I’ve been feeling like it’s not far off. So power to anyone who gets out there and makes art. Get in touch with Astra because we want you at future ArtHere!s, shaking up expectation of where art belongs. And power to everyone in this beautiful city who gets out there to see what it has to offer.
Next up for ArtHere! is the overnight theatre adventure ArtCamp! As one ecstatic audience member so aptly put it: “It's literally going to be the greatest night of your life. Nothing you have done before will even come close in comparison, nor will anything you ever do for the rest of your days.”
Posted by THE CHARLEBOIS POST at 12:01 AM