RISE OF THE PUPPETS
joel fishbane
“We all have strings holding us together,” says Pierrick. “But it’s whether or not the strings pull you or push you that makes you a marionette or a puppet.” It seems important to him that I understand this distinction as I sit down to interview him and his castmates about The Heretics of Bohemia, a new play being produced in Montreal by Scapegoat Carnivale Theatre. Heretics is one of those rare shows that features humans and puppets working side by side and it’s easy for a novice to get tripped up by terminology. “Marionettes generally have a bit of an elitist attitude,” Pierrick adds. “But I’m not trying to be racist. It’s just what I’ve found in my experience.”


Written by Joseph Shragge, Heretics uses both puppet and human actors to tell the story of the  mythical land of Bohemia and what happens when a paranoid king begins exiling subjects into the woods. The show features human luminaries like Leni Parker and Andreas Apergis but also rising puppet stars like Pierrick, his comrade-in-arms Arlo and Vlek, an actor who runs a successful side business as a glassblower. 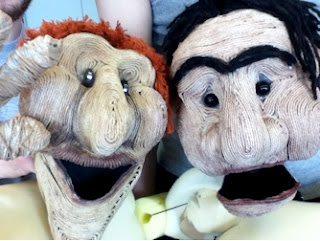 Pierrick (left) and Arlo (right)
We’ve gathered to discuss both the challenges facing the modern puppet and the importance of shows like Heretics in providing opportunities for puppets who hope to make a career on the stage. Canada’s puppet community has long suffered from discrimination and are consistently underrepresented on stage and screen. Many consider them suited only for children’s entertainment and it’s difficult for the puppet with more serious ambitions to break onto the wicked stage.
Arlo isn’t the only puppet confronting prejudice in the workplace: Pierrick admits he once auditioned for Equus, hoping to play the horse.

“I’ve been acting literally since I was born,” says Arlo, a short and legless puppet with a mop of dark hair. “I tried out for [Bernard Slade’s] Same Time, Next Year but I lost to that guy who played Jasper on Road to Avonlea.” He’s referring, of course, to icon RH Thomson, who will be appearing in Slade’s play at Montreal’s Segal centre later this spring.

Arlo isn’t the only puppet confronting prejudice in the workplace: Pierrick admits he once auditioned for Equus, hoping to play the horse. But that didn’t go well either and he was overlooked in favor of a human who wore a tight leotard and an equine. Pierrick is quick to dismiss his anger, but it’s clear that he, Arlo and Vlek are all very much aware of the thorny relationship with their human colleagues.
“Humans,” sighs Arlo. “You can’t live with them, you literally can’t move without them.” He hints at there being some mistreatment and while he won’t elaborate, it is soon revealed that Vlek has been forced to endure four different bodies during the rehearsal process and that his forehead was cast in a variety of different roles. But the most shocking moment came when Arlo’s head fell from the rest of his body – right in the middle of the scene, a moment Pierrick described as “a harrowing experience.”
Blame for the incident fell to Arlo’s human handler, Montreal actor Dan Jeanotte.  Jeanotte claimed to be “pretty upset” by the event and admits that he has never worked with puppets before. He has been under the tutelage of actor/director Zach Fraser, who also works on helping humans understand the special needs of their puppet colleagues. Jeanotte is not alone: humans and puppets have long been segregated and many human actors find it difficult to cope with the change.
“They don’t know some of the steps that a puppet needs to take to get into their body,” Pierrick explained. “They were born into their body, as a human, but puppets we need to work at it to get through the first couple of days at least, figuring out how you move, how you can’t move….there needs to be a little level of patience.”
The tension in the room is palpable and more then a little awkward. There are other humans there – along with Dan Jeanotte, there’s also Morgan Nerenberg (sitting with Pierrick) and Paul Van Dyck (sitting not far from Vlek). Although the humans were outwardly supportive of the puppets, it was clear they were concerned about the effect the puppets might have on Canada’s tight-knit theatre community.
“I wouldn’t really have a purpose,” he said. “So I feel like I’m paid in purpose.”

“Puppets don’t have to be paid or fed,” Paul Van Dyck whispers to me. “And they can work as long as you want them to.” I am stunned by this and even more surprised to learn that the puppets don’t seem to mind their situation. Humans have a tendency to form unions and demand things like maternity leave but the puppet community appears to be more flexible in their working conditions.
“I’m fine with not getting paid,” says Arlo. “I mean what am I going to spend money on?” Pierrick added that money is a human commodity and reminded me that if it wasn’t for Heretics of Bohemia he’d be sitting on a shelf. “I wouldn’t really have a purpose,” he said. “So I feel like I’m paid in purpose.”
Given this, will puppets soon replace humans as being cheaper and more efficient then humans? Should we expect puppets to join the company at Stratford and Shaw? The humans are doubtful and even the puppets, stigmatized for so many years, admit they’re a little pessimistic.
As for me, I’m not so sure. A hologram of Tupac Shakur just performed at Cocahella Music Festival while here in Montreal we’re having a puppet invasion. In a single month we’re seeing Ronnie Burkett’s Theatre of Marionettes, Heretics of Bohemia and Geordie Theatre’s new production of Pinnochio. Non-human actors may very well be on the rise – we may be smart to stay on our guard.
Heretics of Bohemia by Joseph Shragge plays at the Segal Centre Studio Space in Montreal from May 1 – 19, 2012. For tickets click here or visit www.scapegoatcarnivaletheatre.com.
Posted by THE CHARLEBOIS POST at 12:01 AM