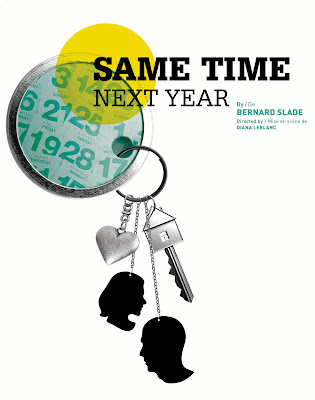 Upstage Host Eric Sukhu spoke with Costume Designer Eo Sharp  about Same Time Next Year presented at Segal Centre for the Arts.  Below is an abridged version edited by Estelle Rosen, CharPo Editor-in-Chief.
UPSTAGE:  Tell us about the story.
EO:  It’s about a couple who start out having a one night stand and go on to continue  having a one night stand once a year. The play takes place every 5 years so we see this couple over a period of 25 years.
UPSTAGE: Once a year for 25 years; I wish some relationships could be that convenient!
EO: And they’re both happily married with children. It goes from 1950 to 1975 so it’s fun for me doing costumes.
It’s like practicing your scales. You get to have a little bit of all the different periods plus quick changes.

UPSTAGE: Tell us about the costumes.
EO:  Well we go through their various ages going from the 50s, to swinging 60s, to an older couple in the 70s.
UPSTAGE: Sounds like a fun challenge for a costume designer.
EO: It’s a really good challenge. It’s like practicing your scales. You get to have a little bit of all the different periods plus quick changes.
UPSTAGE:  How did  you get your inspiration for the costumes?
EO:  I looked at different things. I  went through  all the old Eaton’s catalogues just to get a sense of the period of the different times. I also looked at  old Life magazines  to get a sense of the era. It takes place in California so I wanted to get a feeling of California as well.
At first, I started with Eaton’s because it’s middle class, then the woman becomes wealthier over the years, Because of that  I needed to upgrade, so  I went back and looked at Vogue magazines from the period as well.
UPSTAGE: Did  you see a lot of changes from the 50s to the 70s?
EO: It was interesting to figure out the logistics as well because you realize in the 50s underwear was much more dificult to get in and out of than underwear In the 60s.
We focused more on head gear  like headbands and head scarves in the 60s, hats with veils in the 50s.

UPSTAGE: What about hair and makeup?
EO:  We haven’t done a lot in terms of hair because of quick costume changes. We do a certain amount of ageing, graying of temples but actual hair styles don’t change that much. We focused more on head gear  like headbands and head scarves in the 60s, hats with veils in the 50s. We can make costume changes without using wigs.
UPSTAGE:  Sounds like it’s a social commentary on relationships of the times.
EO: It is. When I first read the script it was at the same time as I saw the movie Shame. I thought it interesting to see how optimistic and light hearted it was. You certainly get a different view of the 70s take on sexuality and ours nowadays. There’s a kind of optimisim and a belief in the sexual revolution;  I think we’re more jaded about it now.
UPSTAGE: How did we backtrack?
EO: I think AIDS happened. We’re much more cautious.  Also when you see a movie like Shame sexuality permeates our society in a way that it did not back then. Whereas in the 70s it’s a liberation, now we find the amount of sexuality in society upsets us.
UPSTAGE: When was it written?
EO: The story ends in 1975. It was written in 1976 so it’s of its time.  For some audience members it would be like a trip down memory lane. For others it would be a complete period piece.
Segal website