Blog: Johanna Nutter and the Journey of My Pregnant Brother (Part VIII) 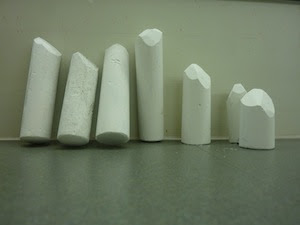 Ten
Time distills. It takes the gritty real and makes memories out of it; strings of pearls, some cloudier than others. And photographs don’t always present the meat of the matter. This is what I’m thinking as I begin this account of the last days of the run.
My mother came back to see the show again on Thursday. On Friday, we spent the day together. Here we are eating Gelato. Out of the forty or so flavours to choose from, independently of one another, we picked the same two: passion fruit and pistachio. 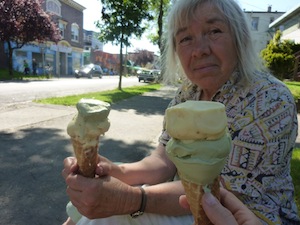 Nice, eh? It’s a pretty teapot for the proverbial tempest that was brewing between us. My mother had watched the second show with a sort of detached and critical eye. I struggled under its gaze throughout the performance. At brunch the next day, she told me that she had hated that character, the mother, that she felt like she was a kind of monster. All she wanted was to slip unrecognized from the theatre as soon as the play ended (No such luck: my brother’s doctor was in attendance and she traced the line of tension between performer and audience member. Family resemblance did the rest). When she told me this, I tried to just let it be. She was expressing an honest reaction to the piece; her perspective, her opinion, and she was entitled to it. It didn’t make it easy to conceive of going through the story again in the evening, though. Contrary to what my family may think sometimes, I don’t set out to hurt them, in fact, I wish I could avoid it entirely. So, as nice as it was to wander the streets and parks of East Van with my mother, eating ice cream, I knew that I needed time alone to search inside for the reasons to keep doing the play. Mum had other ideas. She wanted to stay in Vancouver. There was so much going on; Pride, fireworks, lantern festivals, she started talking about not getting on the ferry and just finding a hostel or a bench or something… I saw it coming and there was nothing I could do to stop it: “All right Mum, you can have my bed for another night”. As the gelato slid down the sides of my waffle cone, I quietly shushed the little voice that cried; “I need to be alone”. How I managed to get through Friday’s show after that strangled and twisted attempt to assert myself failed so miserably is a bit of a mystery. Jeremy had flown back East that morning, so I was not only performer, but stage manager as well. The next morning I woke to find myself alone. My mother had left a note: “I feel as tho I’ve been hit by a bus and I don’t anticipate a speedy recovery”. 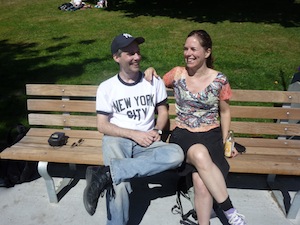 There wasn’t time for many tears because Maxine and Jesse (my other brother from another mother and the other mother) arrived from Victoria to see the last show. Jesse is a truly gentle soul and we have the advantage of not having been raised in the same home, allowing us to be free of any disappointment where the other one in concerned. Their presence, as well as a perfectly timed call from Alison Darcy, who helped me see the bigger picture a little more clearly, made it possible to give the last of the West Coast audiences an only mildly tempered performance.
The next day, we went to the Pride Parade. It was beautiful. So many colours and smiles and music! So much acceptance and freedom and love! Here, look: 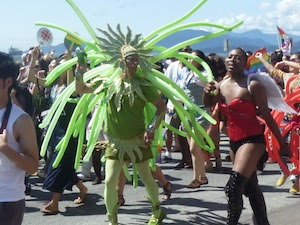 Now, the story not clearly told by this picture is that I caught sight of my brother, James, in the parade, walking just behind the banner for Queers for Israel. I had keenly felt his distance over the past week, but I hadn’t pushed to see him, thinking that I had to respect his need to process what he had seen in “My Pregnant Brother”. But I missed him so much; enough to leap instinctively to his side behind Queers for Israel. He didn’t exactly jump for joy at the sight of me. I sensed something was wrong and asked him if it was okay that I was there. He said he didn’t know. I tried to be more clear, asking if it was okay with him that I was there. Again, he didn’t really have an answer for me. Then he veered abruptly away from the parade and I scampered back to the sidewalk, stunned. The crowd cheered. That’s what crowds do at parades. Jesse and Max, sensing my need for self-control, didn’t press me for details. We moved away from the action towards the beach and Stanley Park. For a moment the parade took on an uglier, more garish slant as my pain found voice in the “acceptance begins at home” inner monologue. But I dropped that pretty quickly. Yes, it hurts. And yes, I will give him time. 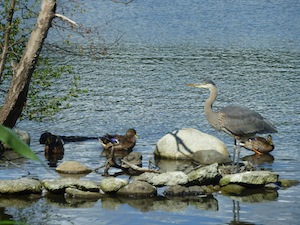 Okay, this picture doesn’t have any kind of heart-wrench behind it. That’s the thing about the natural world; it is what it is, most of the time. Stanley Park is a good place to be when you’re feeling shell-shocked. The ocean, the trees, the animals: a constant reminder of how life goes on with or without you, so get over yourself already and join the party. Ha! The bench Jesse and I were sitting on, facing the sea, had an inscription on it that provided a beautiful bookend to the Emerson quote I started this run with: 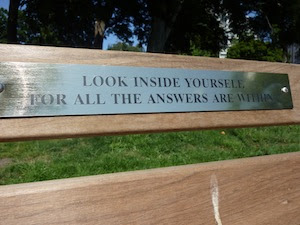 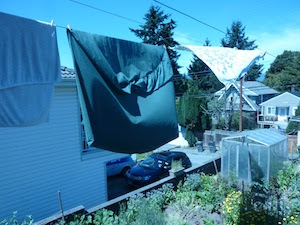 I barely had time to get my sweet little attic home ready for its next occupant before heading down to White Rock: I slept in. Those cavemen throw one fantastic party. After saying goodbye to Max and Jesse, I had my last walk down Victoria to the Cultch. Funny, the things you can get attached to; I found myself saying goodbye to certain plants and buildings along the way. I wished an especially fond farewell to my daily puzzle, DRY VORTE. I’ll buy a glass of whiskey for the first person that can tell me what the missing letters are… 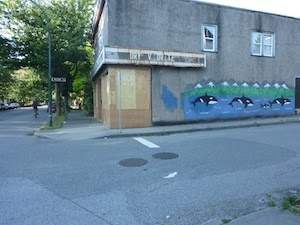 Looking around the lobby bar at the theatre, it started to dawn on me that I had made it through to the other side—perhaps it was the suggestive power of the poster for Cat and Jamie’s show that did it: Other Side Through You. I had been worrying and wondering over this one for a long time and now it was done. I was on my way south of the border, and Dave Mott, one of the festival organizers and a sweetheart, was headed to Saskatoon. Not a lot of time for nostalgia; Daniel Martin, the AD of the fest and his wife Vanessa invited me over for a pre-party dinner. It’s kind of funny in a way that two of my favourite people from this whole journey are conspicuously absent from all photographs. The only picture I have from that whole beautiful night at their place is this one: 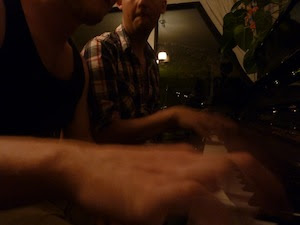 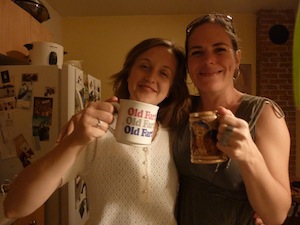 I was just having too much fun to document it. Oh—we did take a couple of portraits of the Sister Show Sisters: Cat Main and Me. She really is like a twin in so many ways, and our shows made such great stage partners. We went down a uncharted path of metastasized autobiographical theatre together that was really just the beginning of what I know will be a much longer conversation. This is what the Neanderthal Theatre Festival gave me that I treasure most: potential collaborators. Another place on the map where I have found fertile soil. 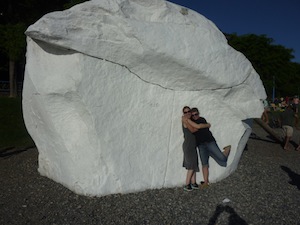 And before I knew it, it was over. I was waking up in the attic for the last time. Lisa Mac and Kevin (remember them from Opening Night?) came to pick me up and take me to their home in White Rock. The story of White Rock has echoes of Romeo and Juliet. A young man and a young woman from rival tribes fell in love but were forbidden to marry. They met in secret on the beach and he picked up a white stone. “I will throw this stone as far as I can”, he said,  “and wherever it lands, we will go and live and form a new tribe”. As the rock flew through the air, it grew bigger and bigger until it landed on the beach and that’s where the Semiahmoo tribe began. It used to be a natural white, but now they have to keep repainting it because it’s too tempting a canvas to anyone with a can of spray paint. 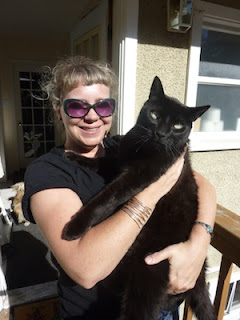 Lisa and I told each other many stories last night. Her childhood makes mine look like a walk in a fun park, but we both tend to look at them with a mixture of curiosity and humour for the most part. We’ve both seen too much to look for judgment in anything. We talked about everyone from high school and where they were now, and where we had been since. It was a comfort to see her, surrounded by the love of her life, her animals, and her absolutely stunning daughter. We also talked about what had happened with my Mum and brother, and she helped me to find my way back to a place where I could appreciate them while not denying the painful places in between us. Here she is with Charlie, her domesticated Jaguar. (Yes, somewhere along the line there had to be a cat picture… it wouldn’t be the Internet without one).
We weren’t very far down our memory lane before the subject of Jay and Tanya came up. They had been our own Romeo and Juliet, only their story really did have a tragic ending. When we were seventeen they had been murdered. Jay’s dad had sent him down to Seattle to get parts for his car remodeling business and Tanya had gone with him. It was going to be a sort of vacation. When they didn’t come back on the day they were expected, we joked that they had eloped. They were so very much in love. They found Tanya’s body in a ditch by the side of the highway outside of Seattle a few days later. It took several more days before they found Jay, further down the road. In those few days in between, there had been whispers around school that maybe Jay had done it; “Well why not? He was Native and Tanya came from a wealthy Scandinavian family…” We knew that was impossible. It was almost a relief when they found Jay: a sort of vindication. Lisa told me she had come across photos of his body on the Internet; research she was doing for a book I really hope she writes.
And now I’m on my way to the scene of the crime: Seattle, Washington. From there I take the train to Centralia, where Kelle will pick me up and take me to the farm she shares with Warren. He’s my teacher. I’ve had many teachers in my life, but he’s the one. He’s the one who changed my life. And he’s invited me to come for a visit. Somebody pinch me.
Posted by THE CHARLEBOIS POST at 4:05 PM