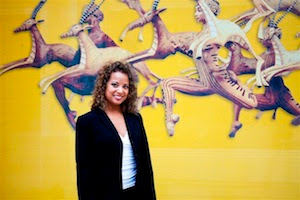 The Lion Queen
Canadian entertainer Kendra Moore’s triumphant return to Montreal with The Lion King
By Richard Burnett
There is a cast party after opening night, but no wrap party at the end of a run. “We’re too busy packing to get to the next city,” says Kendra Moore.

The last time I saw renowned Canadian dancer Kendra Moore was when she and another friend, Cherice Barton, were both dancing with Les Ballets Jazz de Montreal, entertaining audiences the world over.
Then Cher moved to NYC (where her other dancing sister Aszure Barton is the internationally-acclaimed protégé of Mikhail Baryshnikov) and later got hired as an assistant choreographer for director Julie Taymor’s Broadway musical Spider-Man: Turn Off the Dark (before Taymor left the production in March 2011).
Meanwhile Kendra moved to Chicago where she was hired by the touring production of the stage musical The Lion King for which Julie Taymor became the first woman to win the Tony Award for directing a musical, in addition to a Tony Award for Original Costume Design.
In the wake of the retooling of Spiderman on Broadway, Taymor was not doing any interviews to promote this Lion King tour – but in truth I really wanted a chance to blab again with Kendra Moore, who was a member of the global and hugely successful The Lion King Cheetah tour from 2003–2008. Moore is now back on the road with yet another Lion King tour that pit stops in Montreal for a month beginning on August 9.
“I’m on the road 52 weeks a year,” Edmonton-born but Chicago-based Kendra tells me over her cell phone while driving from Ottawa to Montreal with her suitcases thrown into the back of her car. “Having my own car actually makes traveling easier, although normally we have a company flight. Touring with The Lion King is like moving into a new apartment in every new city. I find my own place [paid for by the cast and crew’s company per diem for accommodations] and sign a short-term lease.”
There are 110 people working on this Lion King show, including 48 cast members (actors, dancers, singers and puppeteers).
“In one city I shared a house with four others,” Kendra explains. “We were like family and it was a special time. But I go in stages. In other cities I prefer to live alone. It all depends where I am at that point in my life. In Montreal I’ll be sharing a place with two friends of mine. And I can’t wait to return to Montreal because I lived there for six years and I think it’s the most beautiful and most fun city in Canada!”
After eight years on the road touring with The Lion King, Moore – who also danced earlier in her career with Ballet Austin and Hub bard Street Chicago – has moved up the ranks and is a dance captain on this tour, overseeing 11 female dancers. If one of the girls gets sick, has an injury, has a day off or goes on vacation, Moore knows each role inside out and can replace each of them with just a moment’s notice.
Says Kendra, “I’ve been fitted for my own costumes for every role! Because I’m a dance captain I know all the parts in the show. They just transferred me to this [Montreal] opening and there are seven productions worldwide now. So being in a [global] company like this I can transfer to another production if there’s another opening. For instance, there are Lion King shows in Singapore, Vegas, Tokyo, Hamburg, London’s West End and also on Broadway. Another production is opening in Madrid in October. So there are opportunities to be had.”
The Lion King – adapted from the 1994 Disney animated film – has been seen by more than 54 million people on five continents and has grossed more than $765 million dollars. The play has won numerous awards over the years, including eight Tony awards, notably for its 200 puppets. And it’s score is by Elton John, South Africa’s Lebohang Morake and German composer Hans Zimmer (still best known for his work on Miami Vice).
After their Montreal stint, this production rolls – all 18 semi-trailer trucks packed with sets and costumes – on to Syracuse, N.Y., then to another 10 American cities through September 2012.
But does all this get tiring, night after night, city after city?
“It can be lonely and demanding but it’s not impossible,” Kendra says. “And I’m lucky I’ve never been seriously injured. I’ve been doing it for so long because I just love being onstage. I still absolutely love performing in front of an audience. With this show, even if I’m offstage, I still get goosebumps watching the opening number.”
The Lion King at Salle Wilfred-Pelletier at Place des Arts, August  9 to September 4.
Posted by THE CHARLEBOIS POST at 12:01 AM