Blog: Johanna Nutter and the Journey of My Pregnant Brother (Part X)

Thirteen
Vegas looks great in the rear-view mirror. That’s about all I saw of it. Well, can you blame me? 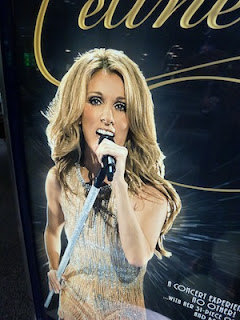 This is the first thing I saw coming off the plane:
I plan to get to know Vegas on the way back, but I was too eager to hit the road. My Mum thinks automobiles are ruining our lives and in many ways I agree with her; imagine how wonderful Montreal would be if every street was just one big terrasse… But there is something about the lure of the open road that is so, well, alluring. Americans understand this. Driving the roads is their god-given right. Five minutes into my new relationship with the highway and my rental car, I was in a euphoric state: it was like coming home. I spent a good chunk of my childhood living on the road. Mum and I playing ‘ghost’ and other word games while she drove; stopping off at roadside attractions along the way; waking up by the side of the road in the middle of the night by the state trooper, shining his flashlight in my mother’s face, “Lady, you can’t sleep here”. Ah, such sweet memories… 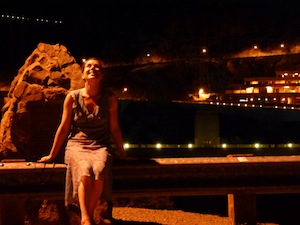 My first stop was an hour and a half down the I-something: the Hoover Dam. It was about one in the morning when the last hairpin turn finally surrendered the concrete behemoth. I was all alone. I parked the car and walked to the edge of the dam.  It was quiet. I looked up at the sky, filled with shooting stars and swooping bats, and I felt the hum and buzz of so much energy filling every space, even the spaces in between my cells, and I was awestruck.
I had anticipated reaching the Grand Canyon before the need to sleep made further driving impossible, then waking up for the sunrise over the cliffs, but by four am I had had enough. I discovered a way to keep myself focused by keeping my hands on the wheel and my foot on the gas, but allowing the rest of my body to dance along to the shuffling songs on my iPod. It made me feel like a muppet, which was also fun. There is no shame when you’re alone in a moving vehicle because you’re gone too fast to care. But when the muppet games wore thin, I turned off route 66 and parked the car by the train station in Williams, Arizona. Zipping myself up in my sleeping bag in the back seat (it gets cold when the sun goes down), I closed my eyes for a couple of hours.
In the morning it was hot. And bright. Really bright. When I got out of the car to stretch my legs, I understood immediately why people in this part of the world wear wide-brimmed hats. I got in the car and started back down route 66. Right there on the side of the road, not two minutes into my drive, was a man sitting in front of his trailer with a small roadside stand, covered in wide-brimmed hats. They are Guatemalan white palm hats, and Cougina Machek, the Hat Man, plunged mine into a bucket of cold water and shaped it for me himself, giving it some ‘feminine curves’. He teaches hermetics, which he informed me is ‘the art of creating your own reality’. I laughed, marveling at this new link in my chain of events: Warren has been talking about this kind of magic since way before it became the big secret, and his home is very close to the original spark of the what-the-bleep-do-we-know people… 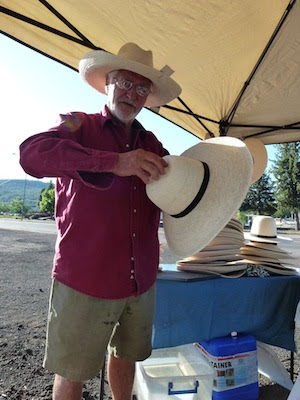 Wonderful is a word that I use a lot. Probably more than any other word after ‘I’. In recent years, I have consciously tried to avoid using it too often. In this case, I don’t know what other word to use: the canyon really did fill me with such wonder that tears formed in my eyes and I started to tremble. I had to hold on to the railing, not from vertigo, but because I felt such a strong desire to send myself out into it. I was not surprised when a tree I had photographed beckoned me in for a closer look and I found the word “lifted” scrawled on its limb: being there lifted me up and kept me in a lofty place for the rest of the day. I spent many hours driving from lookout to lookout along the desert view road, sitting under a tree and taking in a new angle. I also amused myself by watching the tourists photograph each other: the ones standing with their backs to the canyon all seemed to have the same expression: like they had just been confronted with the ultimate humiliation and were bravely trying to look as big as they could in spite of it. 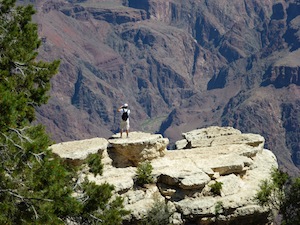 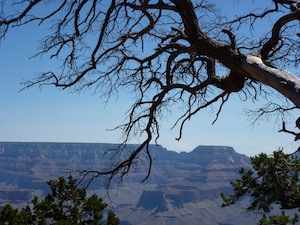 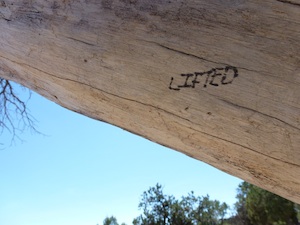 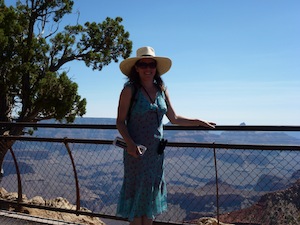 The drive between the Grand Canyon and Taos, New Mexico, the furthest point in my rental car boomerang from Las Vegas, was surreal, and epic, and I think I went a bit insane. Pictures couldn’t possibly show what it was like to ride that road, passing through washes and arroyos, red rocks and blond hills, Monument Valley, Navaho trading posts… At one point, I actually yelled at the scenery, “Come on! Are you kidding me?!” No wonder Americans typically don’t know much about the world outside of the US, there’s already so much to see here. And this kind of harsh beauty was just my type. I had never seen anything so spectacular. Ever. And when I crossed the border from Arizona to New Mexico, ‘land of enchantment’, it only got more so. 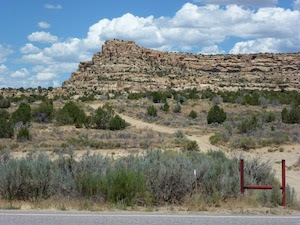 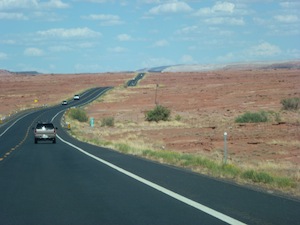 Those two hours of shut-eye could only take in so much. When I reached Farmington, I had to stop. Forty dollars got me a room at the Journey Inn, a shower, and a free phone call to Yesca, my dear friend and final destination. It’s been eighteen years since I saw her and she’s been in my thoughts ever since. She was the first person I met in Victoria and the person I’ve felt most free to be me with. So many parallels between our lives: the hippie parents, the estranged dads, the many schools, and our mutual muse: Rickie Lee Jones. I listened to every Rickie song I had from the border to Farmington, marveling at the fact that I was only a few hours away from Yesca’s beloved Taos, where she was born, where she had spent her summers with her father, and where I had been dreaming of going since I was fifteen. A couple of hundred miles more and I’m there. 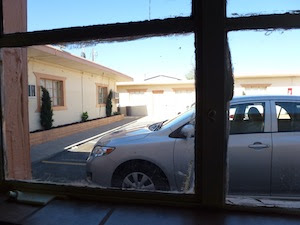