Blog: Johanna Nutter and the Journey of My Pregnant Brother (Part IX)

Twelve
I think if my grin gets any wider it’s going to cleave my head in two and the top half will fall off.
I’m in the sunny little train station in Centralia. Warren just left me here with a vanilla latte. We spent two days together, he and Kelle and I, on their peaceful piece of earth in the flood lands of Washington State. Warren was my teacher for more than a decade. He flew from his farm to Montreal once a month for over twenty years, teaching acting and enlightenment to hundreds of our city’s greatest talents. Oddly enough, most of his students were francophone, while he is from Archer City, Texas. I think that contributed to whatever it was that charmed him away from New York and kept him coming back to Quebec. There was a special kind of listening in that class. People have asked me to describe his teachings and I don’t really know what to say to them. You had to be there.  Most of all, he taught me how to laugh at myself--or rather, with myself…and everything else. Here’s a photo of one of the Ents that live outside his house: 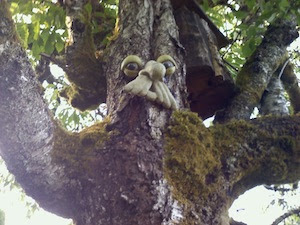 I will now attempt a ridiculously brief history of Warren Robertson for your edification: He was born dead. The midwife plunged him into a bucket of ice water and he sprang to life like a wildcat. Owing to a childhood illness, he spent a lot of time willing his body to move, and move it ultimately did. He became a fast runner and a dazzling dancer. When the war came, he was sent overseas. A case of mistaken identity had him confused with a star quarterback from his Alma Mater and, not wanting to disappoint, he assumed the role of football player Warren Robinson throughout the war. While stationed in Japan, he answered a call for movie extras on a whim. They were looking for football players for Sayonara, starring Marlon Brando.  It wasn’t long before Brando and Warren were friends and Marlon invited him to come back to New York City with him and attend the Actors’ Studio, along with the likes of James Dean and Marilyn Munroe. He also spent a good deal of time with Stella Adler, who claimed him as her dance partner. Discovering that he had more of a talent and passion for teaching, he opened his own school on 44th Street and 2nd Avenue, just up the block from the UN building. His list of students is awe-inspiring: Viggo Mortensen, Jessica Lange…you get the idea. Robert DeNiro came to speak to our class when he was in Montreal shooting The Score. Somehow, a few Québécois actors ended up in his class and, along with an invitation from the NFB, they brought him to Montreal. He fell in love with the city and its actors and began teaching monthly intensives out of L’École des Beaux Arts. I found my way to him in 1998 and that has been, to date, the best thing I have ever done for myself. When he came to see “My Pregnant Brother” at The Centaur, we laughed at just how far I had come. Here he is with Kelle, the thoroughly wonderful woman in his life, and Pagan, his horse: 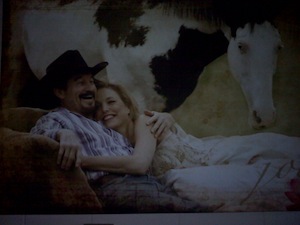 “My father just died and he left me his dog”.
I come out of the sun and turn to my right. There on the Centralia Train Station bench, a Doris Dayish woman is vigorously rolling a lint brush over a navy blue fleece.
“I just got this jacket and I really liked it because it’s light and soft and it has this cell phone pocket on the inside, and, well, I put it the washing machine with the dog blanket, so…”
I ask her what colour the dog is and she smiles wryly:
“White. My sister got a million dollars in assets and I got the dog. Of course, the dog is worth a lot of money. I don’t know why. She’s got these buggy eyes. Sometimes I look at her and I say, ‘I don’t know why you cost so much’. She's a cavalier. Like a Spaniel. You know, with those long flowy ears, and she’s got these markings. She has one brown eye with white eyelashes and one white eye with brown eyelashes. And on the white side she’s all white and on the brown side she’s all brown spots. Two separate sides. I guess that’s what they mean by her markings. I just noticed them the other day. I tell you, I barely got out of the Costco without losing her to someone else. As soon as they recognize the breed they’re all over her. And you know, her bloodline goes way back to England. But I just look at her and I tell her, ‘I don’t know why you cost so much’. I’m not really a dog person. She’s really sweet, though. My father was in and out of the hospital, and she was at my sister’s, and then with someone else, and when I finally got her home she kept thinking she had to go with whoever came over to visit. Poor thing. I hope my sister’s enjoying her million dollars. I’ll be gone for four days. I hope she’s going to be okay. Her name is Sara. Boy, these hairs are really in there. Like they’ve burrowed all the way through…”
She’s amazing, this woman. Utterly beautiful and fascinating. And I don’t think she even knows it. Maybe I can conjure her up someday, out of myself, and show her to an audience. Then they could see what I see. Warren says that’s my gift, that I am a monologist. He gave me several wonderful tools to continue along that path, if I wish. We had such a grand day yesterday. I am feeling protective about our precious conversations and will refrain from saying any more. Suffice it to say that I feel like our relationship has shifted from teacher and student to friend and friend.
This leg of the journey was the most picturesque. But you will notice there are only two  photos on this page, both of them taken with Kelle’s smartphone. When I arrived in Seattle, I was a little afraid to leave the station. Since high school, I had invested the city with a kind of dark criminality. Right next to the station was the stadium where Jay and Tanya’s van had last been seen…. But my short walk around the station revealed a warm and gentle place. In Pioneer Square, a young man was playing the guitar and singing “…parsley, sage, rosemary and thyme…” while two men played chess on a giant board. As I boarded the train that would take me to Centralia, I caught the eye of a woman I had seen back in White Rock and we exchanged opinions on our brief walk around town. Joey from Brisbane had also taken a photo of the chess players and we laughed at ourselves for having mixed feelings about that (the white pieces were being played by a Caucasian and the black ones by an African American). Five minutes into my train ride, I went to upload the photos and discovered that someone had relieved me of my camera. Ah Seattle, I suppose you were just confirming my suspicions for me. I spent a few moments mourning those lost pictures. The one of me and the canoe in the White Rock station especially; these brothers from Sudbury had portaged and paddled it across the country to raise awareness for ALS, a disease that had claimed the life of their father last year. It was being put on a train home by a friend of theirs, whose name, fittingly, was Hope. If you’d like to know more about their trip: 42canoe. Forty-two: you know, the answer to everything in the universe.
Okay. I’ve written myself all the way back to Seattle. Just time enough to find a camera store and replace my Lumix before heading to the airport… 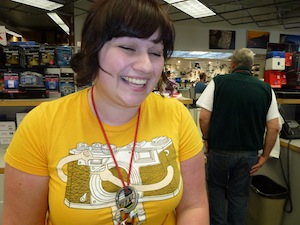 Wow. I can’t believe I just did all that. It was like some kind of strange Seattle rabbit hole. Like no time has passed, I’m at the airport, and I have a new camera. This is Laura, who sold it to me. She’s never seen anyone buy a camera that fast. In the space of two hours, I’ve been on a bus, a tram, a monorail, a metro, a forced march, and another metro. And I managed to take some photos along the way. Here; maybe this will make up for the previous dearth. A lightening tour of the fair city of Seattle, including a lot of the Jimi Hendrix Museum and a picture of Freddie Mercury: the museum was showing live concert footage… Queen in Montreal, of all things. Another one rides the bus. 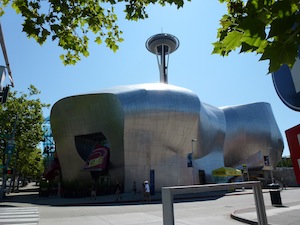 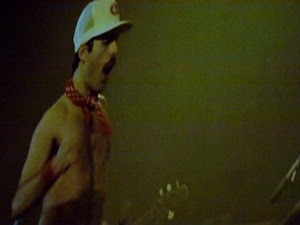 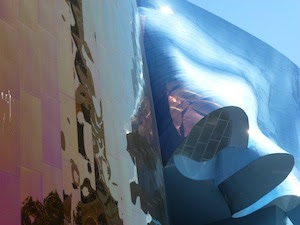 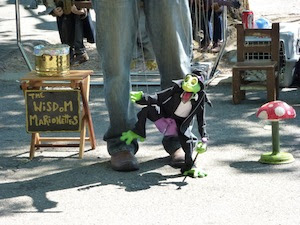 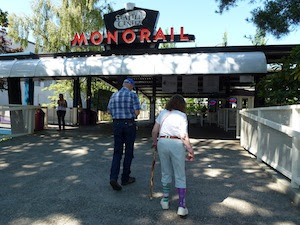 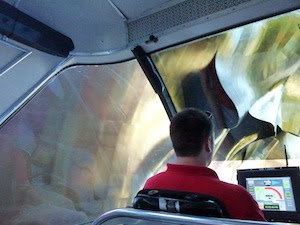 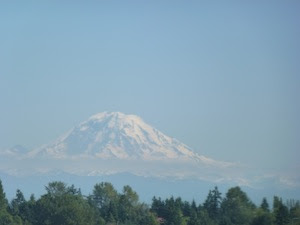 And here, seen through my new zoom lens, is Mount Ranier in all its floaty glory. Ain’t it purdy? Next stop Vegas. Baby.
Posted by THE CHARLEBOIS POST at 5:01 PM