Blog: Johanna Nutter and the Journey of My Pregnant Brother (Part XII)

Fifteen
So, saying goodbye to Yesca wasn’t easy. I hope to be back for the wedding. The crazy green dress from my play inspired Spirit to suggest that be our bridesmaids theme: sequins. Because of course, the sartorial rule for bridesmaids’ dresses is that you can never find an occasion to wear them again. Leaving Taos marked the real beginning of my vacation; just me and the open road for a whole five days. I headed north, waving goodbye to the earthships along the way. I’d been surprised by them on the way in; a whole community of these creations out there in the desert, reminding me of that Co Hoedeman short animated film I loved so much as a child: The Sand Castle. 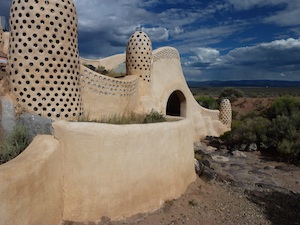 Sascha told me the homes are great; off the grid, cool in the summer and warm in the winter, but that most of the kids who live in them are snobs. Beware the eco-snob. And the skate mom: she has all the dedication of the soccer mom, but with the added bonus of being too cool for school. Just past the gated earthship community, was the bridge over the Rio Grande. I stopped to take a picture of the gorge and met a couple of hipsters. Or rather, absters.  Jess and Lilli both have perfect abs, which they maintain by regular hula-hooping. Lilli Diamond makes the hoops. She usually works on painted frogs, but she’s had to take care of her mom a lot lately, which means she only has time to do the hoops. 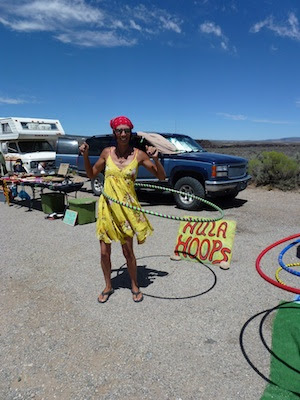 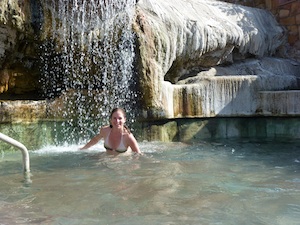 Three hours later, I was in Pagosa Springs, Colorado. There are mineral hot springs there, famous for their healing powers. Of course, it was about a hundred degrees out, so what did I want with hot springs? But they did have a regular pool. And it was hot. So I paid my twenty bucks and stuck my toe into one of the eighteen hot pools just to see what it was like. It was nice. Really nice. Turns out it’s the best way to beat the heat: join it.
When I finally got back in the car, smelling slightly like rotten eggs, I was thoroughly relaxed and very officially on vacation. I drove lazily through Colorado then crossed the border into Utah. For the ten miles before I reached the state line, neon signs kept popping up, warning me that this was really and truly the last chance to buy hard liquor. Right. Mormons. Forgot about them. I had a religious experience myself when the sun set. It was…well, intoxicating. 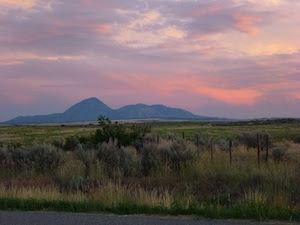 I was hoping to make it to Moab, but I was still under the influence of the hot springs and decided to pamper myself by pulling off the road at 9pm and finding a motel with cable TV. Shiny new car, motel with 60 channels: why not spend a little bit of money on myself once in a while? I work hard, right? The next day I found a typical family restaurant that served those huge, all-American breakfasts. And just across the room from me, what could only be a typical Utah family was having lunch: a man and his wives. I just had to take a picture. I tried to make it look like I was inspecting my camera, but I’m a shitty actor sometimes and I’m pretty sure they knew. 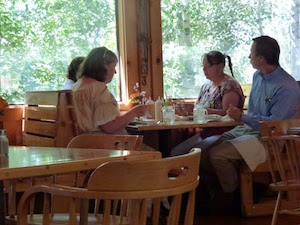 As I was backing out of the parking lot, keeping an eye on the approaching log cabin behind me, I heard a crunching sound. Actually, I didn’t so much hear it as I did feel it; right in the pit of my stomach. I got out of the car and ran to its backside, where I found a very hard and very solid rock attached to it. When I pulled away, I discovered that said rock had taken a big ugly bite out of the Corolla. 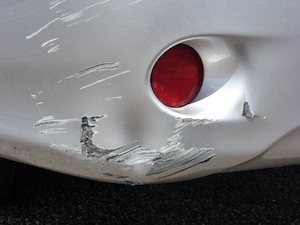 The next half hour was an almost comical series of upswings and downslides:
“Oh, shit! Wait: it’s okay! I paid that extra hundred bucks for collision insurance! Wait: does it count if I collided with a rock and not another vehicle? I’m sure it does. Check the rental agreement. Wait: you didn’t get the insurance from the rental company, you got it from that site you booked the car through: hotwire. Open that confirmation email they sent you… It’s not a confirmation email. It’s a notice informing you that your insurance purchase didn’t go through. Oh, shit.”
My vacation just got a lot more expensive.
Maybe it was that man in the restaurant, summoning his Mormon god to punish me for treating his holy unions like a spectator sport.
Well, there’s nothing I can do about it till I bring the car back to Vegas, so I might as well enjoy the rest of the journey. And in the end, it’s only money. I’ll pay for the repairs, it’ll cost a lot, and then it’ll be over.
You’d think I’d have had my fill of rocks after that, but no. I spent a good deal of the day seeking out the pleasure of their company. Utah has some incredible rocks. I photographed so many it took me two hours to go through them all. Here’s a splattering, mostly of Arches National Park and Dead Horse Point State Park, where they filmed parts of Thelma and Louise. 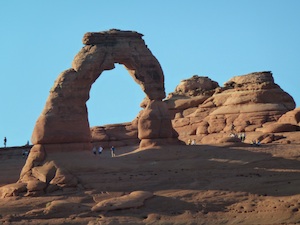 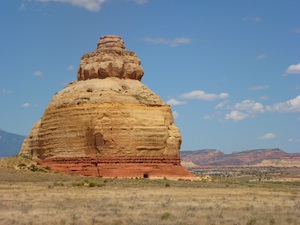 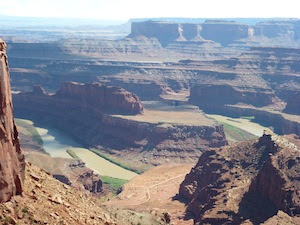 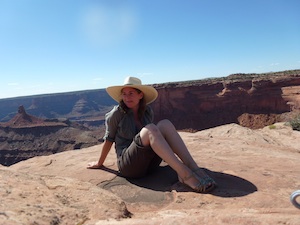 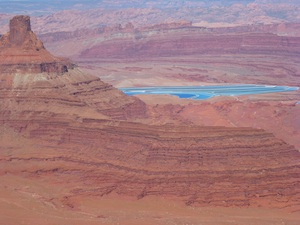 When the sun went down, I headed back to Moab for a cold beer and some food. I turned in at a place called Eddie McStiff’s, which seemed to be the only place in town where anything was going on. It put me in a bad mood right from the moment the hostess drawled inconsequentially; “For one…this way…” I sat at the bar. The band consisted of a man in a black cowboy hat and a woman wearing her prom dress, who were killing us thinly with their renditions of various classics. When they lent their cold, clammy voices to Johnny Cash’s Jackson, whining; “We got married in a fever, hotter than a pepper sprout” I had to stifle a guffaw. And the bartender was a bitch. I don’t use that word often, but there you have it. A total bitch. Oh, she was polite, but in that kind of way where you know it’s because she has to be and she really just resents the time you’re taking away from her real work of flirting with her boyfriend and his buddy, who were sitting two stools down. So, I did something that goes against every grain in my bartending soul: I stiffed her. I paid my bill, just what it cost, and I said,  “See ya, stiffs!” and I walked out of Eddie McStiffs, never to return.
I was starting to worry that the whole rock-bites-car incident had put a serious damper on my magic ride, but when I pulled in to The Lazy Lizard Hostel, a totally different thing was going on. The owner and his brother had stopped by with their guitars and mandolins to sing a few songs, and everyone was gathered in the courtyard, listening. An affable lady, adorably in her cups, pulled out a chair for me and dumped a little white ball of fluff of a dog in my lap, “His name is Tepee”, she said, chuckling. I kissed the puppy on the forehead and relaxed into the perfect harmonies of the two men who, unbeknownst to them, had just put me back on the road to joy; “She’s got everything she needs, she’s an artist, she don’t look back…” 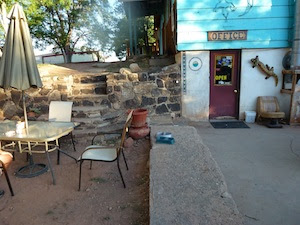