EVENT: The Mysterious Case of the Flying Anarchist 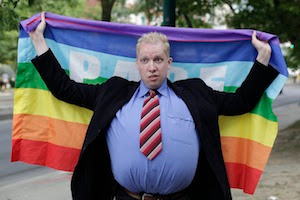 FOR IMMEDIATE RELEASE
THE MYSTERIOUS CASE OF THE FLYING ANARCHIST
A new adaptation of a Dario Fo play by Matt Jones
The next time the G20 comes to town, Rob Ford is ready, Stephen Harper is ready, Police Chief Bill Blair is ready. So when a bomb goes off downtown, scores of protesters are rounded up right away.
Everything is going smoothly until an anarchist organizer falls to his
death from a window during interrogation. Police reports say it's an accident. And that it's a suicide. A lone maniac tries to discover the truth
.What was the Mayor doing at the police station that night?
Based on Dario Fo’s classic 1970 clown show,
Accidental Death of an Anarchist, Matt Jones’s adaptation
is a pre-emptive attack on Toronto’s new political
landscape.
A graduate of Concordia University’s
Creative Writing program, Jones will be starting a PhD
in Theatre Studies at the University of Toronto this
September.
The play is directed by Caroline Fournier, produced by
Matt Jones and Andrea Joy Rideout (Essential Service
Theatre, Teesri Dunya)
s t a r r i n g : Susanna Jones, Kyle Allatt, Mikaela Davies, Caroline Fournier,  Vince Benvenuto, Matt Jones
August 3-7 at Théâtre Ste-Catherine.
514-284-3939   theatrestecatherine.com
blacklistcommittee.wordpress.com
Posted by THE CHARLEBOIS POST at 4:31 PM