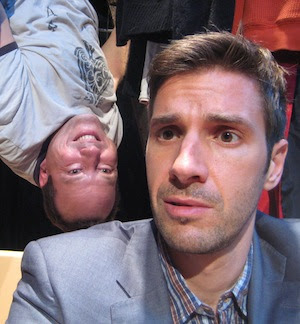 Coma Unplugged
Written by Pierre-Michel Tremblay, Translated by Micheline Chevrier
Directed by Zach Fraser
Thursday, October 20 - Saturday, October 29, 2011
To watch interviews with the director and cast members please go to:  HYPERLINK "http://www.talisman-theatre.com" www.talisman-theatre.com
“I think the big cynical joker in you got rid of the poet, the way a bouncer kicks a homeless person out of a cool bar.” - Marjorie
Montreal, September 2011- Talisman Theatre is excited to present the Montreal English premiere of Coma Unplugged, playing at Studio Jean-Valcourt in the Conservatoire d’art dramatique de Montréal from October 20-29. Directed by Zach Fraser, the talented cast includes favourite Montreal actors Éloi ArchamBaudoin as Daniel (With Bated Breath, Centaur), along with Glenda Braganza (A Line in the Sand, Tableau D’Hote), Susan Glover (Equus, Segal Centre), Chimwemwe Miller (The Flood Thereafter, Talisman) and Donovan Reiter (Life is a Dream, Scapegoat Carnivale).
As a recently divorced humour columnist for the city's most read newspaper, Daniel is a local celebrity. For Éloi ArchamBaudoin who plays Daniel, the character contemplates the important things we all should have on our mind, from the notion of success to the excess of oversized vehicles, “This is a very modern piece set in present day, with references to recent events and Montreal news.” Coma Unplugged is a witty and beautifully touching look inside Daniel’s mind. Here, we meet his various ‘visitors’: his ex-wife Marjorie (Braganza), Roger- a childhood bully (Reiter), his mother Madeleine (Glover), Ishouad- a mysterious Tuareg warrior (Miller) and Stephen Hawking. These tragicomic characters win over our hearts as they face the gap between their youthful dreams and their adult realities. Daniel ultimately grasps that he is comatose following a traffic accident. Or was it an accident? In his own words, he wanted “to see if I could be as brave as that little Chinese guy in Tiananmen Square”. His daughter needs him, but will he choose to return? This is the reality check that leads him to examine the cynicism inherent to his era. Teetering between life and death, he finds clarity.
Director Zach Fraser is excited by the theatricality in Pierre-Michel’s writing and looking forward to creating the fusion of physical realism and surrealism in this magical, twisted place. “Our central character is in a moment of crisis where he has everything to lose or everything to gain. In turn, the audience is drawn into each character’s struggle as they live through Daniel and he through them. I hope that along Daniel's journey the audience can have their own moment of reflection. In our society we rush through life and don’t take enough time to cherish the simple pleasures and beautiful moments.”
Glenda Braganza (Marjorie) is thrilled to work with Talisman, “This is a challenging and great play because it walks the line between humour & heartache, perception & reality; desire & disdain.” Pierre-Michel Tremblay’s dark comedy is a wise message for all generations: cherish life and love, because sardonic indifference leads only to emptiness and apathy.
Talisman Theatre Artistic Director Lyne Paquette leads the production design. She illustrates how her artistic vision reveals Daniel’s brain by starting with a cluttered set that gradually is cleaned out as the character arranges his thoughts and feelings.  “Daniel’s inner workings are damaged, bandaged and collapsing but still standing, as he figures out the various compartments of his world.” Matthew Waddell’s all-encompassing surround sound will draw audiences in. Completing the integral design team is David Perreault Ninacs, lights and Fruzsina Lanyi, costumes. The stage manager is Sophie Coté.
“Humour: in ancient physiology, one of the four chief fluids of the body; blood, phlegm, choler and melancholy…” - Daniel
Coma Unplugged
Talisman Theatre
At Studio Jean-Valcourt in the Conservatoire d’art dramatique de Montréal
4750, avenue Henri-Julien (parking lot opens half an hour before the show, $5)
Tuesday to Saturday, 8:00 pm
Matinees: Wed. Oct. 26 at 1:30pm and Sat., Oct. 29 at 3:00 pm
25$ regular, 22$ students/seniors, 13$ Carte Premières
To buy tickets online:  HYPERLINK "http://www.talisman-theatre.com/play" www.talisman-theatre.com/play
Early bird discount tickets at $20 are available online now until Oct. 19.
About Talisman Theatre ( HYPERLINK "http://www.talisman-theatre.com" www.talisman-theatre.com for bios and information about past productions)
Talisman Theatre’s mission is to produce English-language Montreal premières of contemporary Québécois works, bringing the visceral intensity of Québécois theatrical practice to non-Francophones. Join them on Facebook under talisman.theatre and on Twitter under @theatretalisman.
Coma Unplugged has toured widely outside of Quebec in French. Within Quebec it originally appeared in French at Théâtre de La Licorne and was successfully restaged at Rideau Vert in 2009. A success with both the public and critics, it won the AQCT's ‘Prix de la critique’ in 2007.
Fundraiser: This show marks the 5th anniversary of Talisman Theatre. This coincides with the 50th anniversary of the National Theatre School of Canada (NTS). Talisman is founded by two NTS alumni (Lyne Paquette and Emma Tibaldo), the design team is made up of NTS graduates, and the company employs mostly NTS actors. Coma Unplugged’s performance on Oct. 25 will be a fundraiser for Talisman Theatre that celebrates both anniversaries. There will be a free, pre-show 5 à 7 followed by a performance of Coma Unplugged. The soirée welcomes Simon Brault, who will speak briefly on the importance of English language arts in Montreal and Matthew Jocelyn, who will talk about his vision of a Bold New Era and the 21st century aesthetic of trans-disciplinary theatre. Guests can enjoy finger food, with a suggested donation of $5 to $500 for a glass of wine, for the fundraiser. Tickets to the show are regular price, $25.
Link to event:  HYPERLINK "http://www.talisman-theatre.com/2011-event-5a7.html" www.talisman-theatre.com/2011-event-5a7.html
Posted by THE CHARLEBOIS POST at 5:01 PM