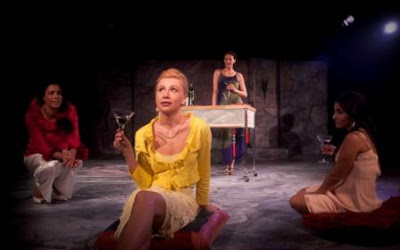 Five women, five friends, and lots of fidelity issues.
...a proposition will either rip the group apart, or solidify it.
by Sarah Deshaies
The Arrangement, written by Christine Rodriguez and directed by Jacqueline van de Geer (both Montreal fixtures) invites us into the world of five, diverse middle-aged women, a group supposedly tight-knit since university.
Empathetic, lovely Faye (Rodriguez, filling in last minute) is dying, and her actions threaten to polarize her group. Two of them are already at each other’s throats most of the time. Barbara (Marie-Noëlle Dufour)  is a rigid, perfect stay-at-home mother and is a natural clash to the flamboyant, working woman Inez (Julie Barbeau). On the fringes are Jaya (Michaela Di Cesare) and Anca (Luiza Cocora), who both have secrets.
...she proposes an arrangement that is both insanely practical and obscene, depending on how you feel about it.
Faye knows she’s on her way out, but she’ll feel better if she thinks her husband and two young daughters are taken care of when she’s gone. Childless Inez has been futilely pursuing a married man for seven years. Because of her impending death, Faye’s logic is clear and her sense of societal propriety is blurred, and she proposes an arrangement that is both insanely practical and obscene, depending on how you feel about it. The fallout from this proposition will either rip the group apart, or solidify it.
The themes in the play (friendship, love and support) are admirable. The execution of the play is less so.
Each woman is assigned a monochromatic outfit, each mildly symbolic. But the character development tends to be as flat as the colour choice. We aren’t allotted enough time in the play, or strong enough dialogue, to truly plumb the depths of the issues facing these five ladies.
The staging could do with some re-arranging, pardon the pun.
The acting is best when the action is one-on-one, as opposed to the group scenes, which tend to lag and feel inauthentic. Each woman visits Faye in the hospital on her own, and here we feel genuine moments of friendship and character.
Barb, fastidious and overbearing in all points of her life, fills up her visit by taking care of Faye: brushing her hair, scrubbing her face. Jaya, a gentle soul who serves to push along a lot of the plot, lies to Faye in order to keep her secrets from shocking her. Anca is truly animated and interesting when visiting Faye.
The staging could do with some re-arranging, pardon the pun. Several key moments are marred by backs to the audience, a basic rule I remember being taught in high school theatre. The play actually has a surfeit of room to breathe in, set in the pretty spacious black box of Espace Berri. A tighter set-up for a cast of ordinary characters with dramatic secrets would have served the play better.
Production company La Tigressa has a mandate to feature “diverse female characters that go against stereotype.” While our leading ladies have diverse backgrounds, we don’t get the chance to see them fully fleshed out. The Arrangement concludes with a tidy ending.
Five women, five friends, not enough time to sufficiently investigate the story binding them together.
The Arrangement is running until Oct. 30 at Espace Berri, 4001 Berri. The play runs about 1 hour, with no intermission.
Christine Rodriguez's web site
The production's web site
Read Christine Rodriguez's blog
Posted by THE CHARLEBOIS POST at 3:23 PM