Review: The Play's the Thing 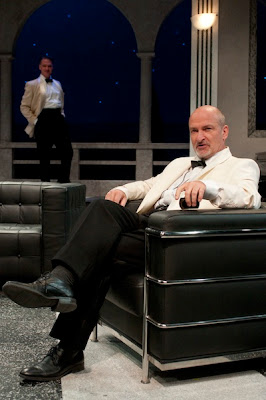 Paul Hopkins (l) and James Kidnie
(photo: Andrée Lanthier
This Play Is Indeed The Very Thing
Broadway production values at Segal
By Byron Toben
The Play's The Thing provides a humorous antidote to the Segal Centre's last show, the gripping but intense Equus.
In the early years of the 20th century, Ferenc Molnar reigned supreme among Continental European playwrights as did Ibsen in Norway, Chekov in Russia and Shaw in England. He wrote some 40 plays, became rich and lived high on the hog until encroaching Nazism forced this witty Jewish Hungarian  writer to flee to New York, where the movie version of his play The Swan starred Grace Kelly and Carousel, the musical version of his play Liliom, became a stage and cinema hit.
It would be hard to improve on the preview in...any of the myriad details that go into a production.
Two famous British playwrights adapted his The Play At The Castle. Tom Stoppard (of Rosenkrantz fame) and P.G Wodehouse ( of Jeeves fame) each tried their hand at it. Mr Wodehouse's version, borrowing its title from the late Mr. Hamlet, of Denmark is what we have here.
I saw a preview immediately following the popular Sundays at the Segal lecture. It would be hard to improve on the preview in terms of acting, direction, set design, costume, incidental music or any of the myriad details that go into a production. The first act, some in the audience felt, was a bit slow and sleepy. This may be due to the script's Aristotelian structure..the beginning is exposition, the second act the plot thickening and the third act resolution. The drawing room events in the first act did provide the framework for the second act developments and the third act resolution provided funny bone fireworks as all ended well and happy days were here again as sung by the cast in the bows to a standing ovation.
With such a fine cast, kudos also to long time Segal casting director Rachelle Glait...
Blair Williams (last seen here acting in Blithe Spirit) exhibited his directorial chops in guiding a fine cast of Paul Hopkins as  Turaj, a playwright (and Molnar stand in?) who manipulates his cynical partner  Mansky (James Kidnie) and despondent young protégé Albert (Chris Barillaro) into believing that an overheard passion berween Albert's fiancé, the star actress Ilona (Jessica B. Hill) and her former mentor, Almady (Michael Rudder) was not what it seemed. Acting Guru Chip Chuipka proves that there are no small parts as he  plays an aged and lonely butler (what would drawing room comedies do without butlers and maids?)
With such a fine cast, kudos also to long time Segal casting director Rachelle Glait, who has a nose for ferreting out who is apropos and available. Ms Glait was also assistant director for Equus and we look forward to her being a main director some one of these days.
The luxurious Mediterranean castle and period costumes devised by Peter Hartwell confirm the Segal's rep for Broadway production values.
The Play's The Thing is at The Segal Centre until November 20
Posted by THE CHARLEBOIS POST at 4:18 PM

Email ThisBlogThis!Share to TwitterShare to FacebookShare to Pinterest
Labels: Byron Toben, Segal, The Play's the Thing