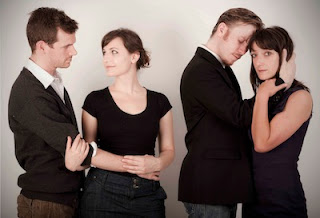 Challenging Closer
smolder and fizzle
by Sarah Deshaies
The producers of a play that has been adapted into an acclaimed movie have an extra challenge on their hands. Like literary fans watching the film adaption of of a beloved book, the audience comes with strong preconceived notions of the show they’re about to see. It's up to the cast and crew to create something that not only is not a carbon copy of what already exists, but also to build upon what came first.
The minds behind Montreal's latest staging of Closer definitely have this challenge on their hands. Patrick Marber's caustic, trying tale of four souls falling in and out of love in London won accolades when it debuted in 1997. The 2004 movie, with megawatt stars Natalie Portman, Jude Law, Julia Roberts and Clive Owen, received two Oscar acting awards.
Sometimes, Closer smoldered; sometimes, it fizzled.
This latest offering, while offering many delightful and juicy moments, sometimes hesitates to scratch the bloody surface underneath. Sometimes, Closer smoldered; sometimes, it fizzled.
While the play is rooted in modern overlapping, love stories, there's a wisp of the ethereal when self-described waif Alice (Lydia Zadel) wafts into wannabe writer Dan's life. Inspired by her girlish neediness and mysterious past, Dan (Chris Hayes) builds a novel around his lover. When the time comes for his photo jacket photo, he falls for Anna, his photographer. Things get further complicated when he tries to steal Anna (Inka Malovic) away from her dermatologist husband, Larry (Alex Goldrich). And so ensues the passion, the betrayal, the revenge fucks, the bitterness, and the crying.
It’s a thrill to see such a scathing story happen so close to your feet.
I preferred the male half of the quartet; when their characters’ fortunes are at their highest and their lowest, Goldrich and Hayes performed with verve and control. Zadel and Malovic’s breakdowns don’t sting as much.
A smoldering moment example: Dan's first encounter with Anna is intriguing as his intentions are laid out, and later Alice's feelings of betrayal are laid raw and open. As for a fizzling moment, when Anna reveals she will leave Larry, and he berates her, it falters for a moment.
The action unfolds in a narrow space that halves the audience, with each side facing the other. It’s a thrill to see such a scathing story happen so close to your feet. Short videos help break the play out of the live action.
Andrew and Lydia Zadel are the brother-sister duo orchestrating this production; he directs, she stars (and edits the film segments).
He said at Closer’s opening night intermission that he's been asked countless times whether he thinks of the movie version when working on the play. His right answer: no. It's hard enough to create something when an iconic version has already been molded.
See it for the Zadels and Co’s version of Marber’s scathing wit.
Closer plays until Oct. 22 at Espace Berri, 4001 Berri St. Showtime is two hours, with a 15-minute intermission. Tickets are $20, $15 for students and seniors.
Website.
Read Andrew Zadel's first-person piece about directing Closer.
Read the upstage interview with Zadel and Inka Malovic.
Posted by THE CHARLEBOIS POST at 11:23 PM