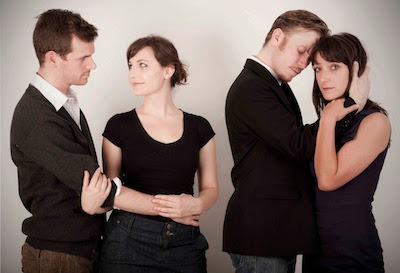 Looking Closer
when a choice of a play should have been obvious
by Andrew Zadel
No matter how starkly obvious it seems to me now, the decision to mount Patrick Marber's Closer was not made overnight. I read dozens of scripts, as did Lydia Zadel, the co-artistic director of Chesterfield Productions, and Inka Malovic, a young Bosnian actress who trained at the Lee Strasberg Film and Theater Institute in New York. We made lists, had meetings, debated over spicy Thai food, made shorter lists, and had meetings in which previously shortened lists were made long again.
It is about those moments that hurt like hell but in the end may be the only things keeping us human.

Every play we discussed had its weaknesses and its limitations, but Closer was the one text that refused to be dropped from our lists. Patrick Marber's 1997 play is gutsy, honest and raw. It is not about long-dead British kings, social revolutions, or Afghanistan. It is about four people who could be our friends, who could even be ourselves. Closer is about things we have all lived. It is about those moments that hurt like hell but in the end may be the only things keeping us human.
Chesterfield Productions has existed for ten years. Breakfast in Eden was our first play and my first script. It had a modest two-show run at the small, cabaret-style Ballustrade space at the Monument National. I enlisted my sister to play opposite me, first of all because she was talented and secondly because I knew where she lives (I still do) so she could never miss a rehearsal without me tracking her down.
We went on to mount a show every two years or so, usually a new script of my own. In 2004 Steel, my one-man drama about betrayal and the birth of the Canadian railway, won “Best Original Work” at the Fringe in London, Ontario, and was runner up for the “Chapter's Best Text Award” at the Montreal Fringe.
Toronto's Praxis Theatre remounted Steel and presented two of my new plays at the SummerWorks festival. With this new outlet for my writing, Chesterfield Productions turned towards existing contemporary texts. Lydia's performance in Daniel MacIvor's See Bob Run was the talk of the Montreal Fringe in 2008 and was enough to garner her the “Best Solo Performance” accolade in London, Ontario, the next year. It was only a matter of days after the curtain went down in London that we started talking about the next project.
This is at times a hard play to watch, and it proved even harder to rehearse.
We knew that Closer was the right decision as soon as we put out the audition notice. The response was massive. The audition process reminded me of two things: people like to use Neil Labute monologues as audition pieces, and Montreal has a lot of talented male actors. After a long callback session and an even longer meeting we settled on Alex Goldrich (recently appearing in the Montreal Shakespeare Company's Titus Andronicus) and Christopher Hayes, who trained at the Neighbourhood Playhouse in New York.
This is at times a hard play to watch, and it proved even harder to rehearse. Even with our meticulous stage manager Chana Ellman keeping us firmly on course, rehearsals were never a matter of simply going through the motions. Closer is a breakneck, blood-and-guts kind of drama: the setup takes only minutes and for the next two hours things fall apart and back together again in many savage ways. In this play there are no “safe” scenes. Whatever we were working on that day, the actors had to lay their innards on the table from the moment they walked into our rehearsal space at the Freestanding Room.
If you don't like to see grown men cry, if you don't like the smell of sweat, then maybe you should just stay home and watch a DVD.
Yet despite all the emotional tidal waves they navigated in rehearsal, there is one thing that I could not prepare the actors for. When the lights go down on Wednesday night in the small black box of Espace 4001, the actors will feel something new, something visceral and maybe a little terrifying. In our show there is no orchestra pit, no apron stage, no safety net. The actors will find the audience sitting both in front and behind them, only inches away, lurking right under their bloody noses and spying over their shoulders. Boxed in by other nervous audience members and two stark black and white images on projection screens, this will be the live intimacy of the theatre pushed to the next level. Some might even call it claustrophobic.
If you don't like to see grown men cry, if you don't like the smell of sweat, then maybe you should just stay home and watch a DVD. If, however, you do decide to take the risk, you will be reminded what living, honest theatre is all about: it's like throwing Christians to the lions, except the lions have to pay to get in.
closer -- written by patrick marber, directed by andrew zadel
october 12 - 22 at espace 4001
box office: 514.649.2249
watch the trailer
Posted by THE CHARLEBOIS POST at 12:02 AM