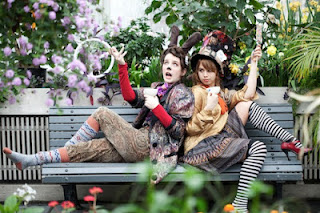 For each show that I direct, I take a different approach.  I spend time with the script reading it over and over, imagining all the things I could do with it in my head.  Then I begin thinking about the tone I want to set in the rehearsal room: what kinds of exercises will assist the performers in getting where they need to go?  What kind of table work would serve the text?  What questions should I pose in discussion to help us dissect the work?
I was scared that in the act of trying to create it, I could kill it.

I was just a teeny bit terrified when I first began delving into Alice’s Adventures in Wonderland to find my approach… the reason being this is a show that lives and dies by impulse.  The show works best when the audience feels like the performers are throwing it together, making it up off the cuff, that at any moment it could all come crashing down.  When the show walks that line it really feels like you’re in the imagination of a child.  Impulse and fun don’t usually come about from strict planning.  This is why New Year’s Eve is almost never a good time; the parties are over-planned, and as a result there’s no spontaneity.  I wanted to create a space where the performers would follow any curiosity.  I was scared that in the act of trying to create it, I could kill it.
The first thing I did was encourage myself to be free.  If, in the moment, I wanted to veer off the rehearsal plan, I was going to do it.  I began rehearsals by asking all the performers to follow any impulse that came up for them, even if they thought they would never use it, for the sake of play.  I tried new exercises.  I included games for fun.  And (big breath in): I eliminated table work.  We did not sit around a table and pick the script apart moment by moment.  We did discuss these moments, but far more casually, as they came up.   There is a very stern grown-up in my head that has been telling me: “You just don’t want to do the HARD work.” And I’ve just kept insisting this is the hard work.  This is what this story needs.  And so far it has been working.
I’ve been saying ‘keep it’ a lot lately.

Now it gets tricky though.  Anne Bogart stated in A Director Prepares: Seven Essays on Art and Theatre, “When an actor achieves a spontaneous, intuitive or passionate moment in rehearsal, the director utters the fateful words, ‘keep it’ eliminating all other potential solutions.  These two cruel words, ‘keep it’ plunge a knife into the heart of the actor who knows the next attempt to re-create that result will be false, affected and lifeless....The actor must now find a new deeper spontaneity within this set form.”    I’ve been saying ‘keep it’ a lot lately.   Our form has mostly been set.  It was a truly great adventure to find the form.  Now I am faced with supporting my performers in finding this even, “deeper spontaneity,” that Bogart is talking about.  I’ll let you know how it goes!  But only if you promise not to tell on me to that stern grown up in my head.