The Upstage Interview: Ann-Marie Kerr on The Debacle 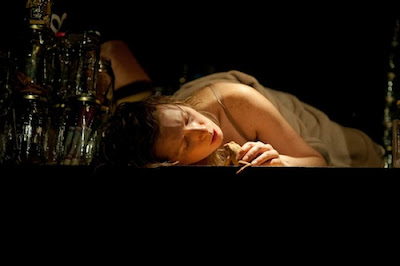 There’s a ringing phone on the floor which she can’t reach.

Upstage and Charlebois Post Contributor Sarah Deshaies spoke with Director/Actor Ann-Marie Kerr.  Below is an abridged version edited by Estelle Rosen, CharPo Editor-in-Chief.
UPSTAGE: On the line with me is Ann-Marie  Kerr. She’s both performing and directing The Debacle being presented as part of Festival TransAmérique (FTA). The story revolves around Margaret who has to uncover secrets of her past and try to recreate memories. How did it come about that you’re performing and directing?
KERR: I was the Director and Co-Creator,with Susan Leblanc Crawford, of the project. When we were invited to perform at the FTA, Susan became pregnant. So we switched roles.
As we were creating this show, we had talked about the possibility of having two productions of it; one in which I would perform and one in which she would perform. And suddenly it came true. She’s on the outside and I’m on the inside. It’s been a thrilling experience to collaborate in this way.
It’s the first project we’ve worked on together.

UPSTAGE: Would you say it’s a two-person project in that sense?
KERR: Oh yes.
UPSTAGE: Have you had any input from anybody on the  outside or has it been intensely personal between the two of you?
KERR: I would say it’s been quite personal between Susan and I. She’s part of a theatre company here in Halifax called Zuppa and The Debacle is a Zuppa show. In the final week before we take it to Montreal, we’re going to have a local Director we know and trust to give it a kind of perspective that we don’t have because we’re so close to it.
UPSTAGE: I would imagine there must have been a lot of back and forth being a smaller two-person project.
KERR: It’s a piece which was initially her solo show. It’s very personal. We share a lot of things about our background.  We’re both from physical theatre backgrounds. It’s the first project we’ve worked on together.
She’s sequestered in her attic with about 100 jars filled with memories of their past.

UPSTAGE:  You mentioned it’s a play about memories; going back and exploring things has a sad feeling to it. Tell us a little bit about Margaret’s journey.
KERR: She’s remembering her sister who is either already dead or is dying. There’s sort of an ambiguous reality going on.
Margaret is a chryo-biologist; someone who works on freezing temperatures on living things and does experiments in this area. She’s under some kind of false belief that pehaps if she implements some experiments on her sister  by freezing memories into jars, maybe she can elongate her sister’s life or save her.  It‘s a  horrible form of denial.
She’s sequestered in her attic with about 100 jars filled with memories of their past. She travels through time and remembers what they’ve been through together. But mostly she’s coming to terms with the fact that her sister is leaving her behind.
UPSTAGE: What do you think audiences are going to learn about how to deal with loss; moving from denial to acceptance?
KERR: If they were to take the journey that Margaret goes on as a clue to something positive in their lives; it’s about cracking open. There’s a lot of metaphor in the play about  ice breaking through, melting, thawing and that is in effect what she does in the end.
She holds a funeral service and does a bit of a eulogy which is really in fact a series of memories. But she somehow faces the fact that even though she can’t leave her attic, she is coming to terms with the fact she’s the only one left in her family.
Maybe people would take away the idea of personal revolution we may need to go through in order to come to terms with something as horrible as your last family member dying.
She’s doing something that is so ridiculously naïve in attempts to preserve her sister.

UPSTAGE: Today we have so many ways of preserving and making memories with video for example. Also we’re living longer. Do you think as a society it’s getting harder for us to move on, leave memories behind, accept and grieve?
KERR: As I hear you describe that, the play is the opposite. It’s so naïve what she’s trying to do.  She’s not looking at photos. She’s looking at a jar with a moldy baloney sandwich that belonged to  an old janitor of hers. She’s looking at an old rubber cuddle fish that her sister used to keep around.
This play feels like a bit of a throwback. She’s doing something that is so ridiculously naïve in attempts to preserve her sister. She’s not doing anything pro-active or anything current even though she is a scientist. We’re surrounded by items about people who have died. For example we often see postings in FB pages on people’s birthdays who have died long ago.
It’s quite exquisitely lit; all the lights are clamped to the inside of the set so they can light tiny spaces.

UPSTAGE: There’s something indelible about it. But Margaret is dealing with it in her own way by preserving memories in Mason jars. I’m trying to visualize what the set is going to look like.
KERR: It’s about 14’ in the air with approximately 100 jars up there. I have about 6’ of space to move around in, then I’m surrounded by all these jars.
It’s quite exquisitely lit; all the lights are clamped to the inside of the set so they can light tiny spaces. By lighting a few jars, you get hints of things in one corner or another.
The space looks like it goes all the way back; actually it’s up in the air so the audience has to look up towards the set giving a feeling of her on a perch.
UPSTAGE: Are you also trying to convey a sense of adulation by her being in the attic space?
KERR: There’s actually no way for the actor (me) to get down. When I first directed Sue we had a ladder because I wanted to have her crack through and descend. But we changed it.  Now she’s completely isolated. There’s a ringing phone on the floor which she can’t reach. She realizes that she agreed to have the hospital phone her if they needed her to come, and it was them calling.
UPSTAGE: A tale of memory and dealing with loss; something we all need to think about.
fta.qc.ca
Posted by THE CHARLEBOIS POST at 12:01 AM