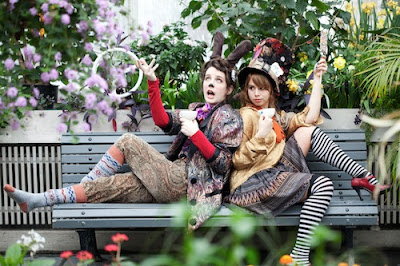 Part I
Who is Alice?
by Crystle Reid
Alice in Wonderland is a really old story; Carroll first penned it as a novel in 1865.   Since that time, the tale has been explored countless times in books, on the stage, in film, even as a video game.  Why tell the story again?  Why tell the story again at a Fringe Festival where the shows that usually do best have serious sex appeal?
The beginning of the answer is I fell in love with the story.  I was first asked to direct Alice in Wonderland at Champlain St. Lambert CEGEP for their theatre club.   It was such a delightful experience.  The script is like an onion, with layer after layer.  At first glance it’s a funny, nonsensical tale.  The further in you mine the more there is to discover.  Many of the jokes are very sophisticated.  For example, the character of the mock turtle: a cow in a turtle shell is a play off of mock turtle soup which is made with beef.  Naturally the mock turtle is having some serious identity issues.  The mock turtle isn’t the only one.   Alice is wandering around searching for the perfect role model of adult womanhood.  She is sure once she finds the sparkly tiara clad queen she’ll have her gal.  We all know that isn’t going to work out as planned.  I had hoped to grow up into a princess so I understand where Miss Alice is coming from.

This story became my playground.  And I wasn’t alone.  The performers and designers were engaging with their own impulses in ways I had never witnessed before.  Everyone was having so much fun.   When we performed it, audience members both adult and child had just as much fun as us and left with big smiles.  Much of the work I’ve done in the past has been about engaging with social problems.  I’ve always viewed theatre as a vehicle to create positive change in the world.  Comparatively, Alice appears to be such a lighthearted story.  Watching performers and audience leave in a great mood, I’m discovering a new kind of change.
I decided to return to this story again for the Fringe Festival.  I chose it because it has a universal appeal.  A five year old will enjoy it but so will you and your Grandma.  To me that perfectly fits the block party feel of the Montreal Fringe Festival.   I put together a group of performers who excel at creating different characters, enjoying the work and following their impulses.  In short, I found a group of people who would play with me.  In a few brief weeks we’ll be looking for an audience who will join us for an adventure in wonderland.
To book tickets to Alice's Adventures in Wonderland
Posted by THE CHARLEBOIS POST at 4:37 PM