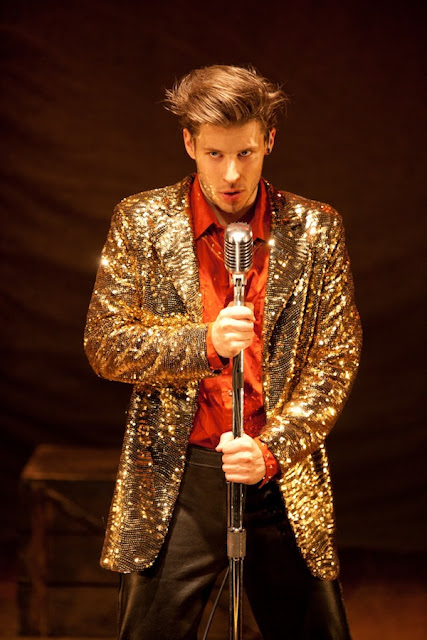 A Hill Too Far
Centaur's closer has serious problems
by Gaëtan L. Charlebois

The Haunted Hillbilly comes with huge buzz - somewhere at the volume of an industrial apiary. It has been workshopped in this city, then presented before and there was some surprise, and no little amount of excitement, when Roy Surette decided to include the Sidemart Theatrical Grocery piece in his season - indeed, as the season's splashy closer. According to reports from people who have seen it before, it has been shortened considerably.

Now one would assume that meant it had been tightened. One would be assuming wrong. Despite an explosion of energy at the beginning of this Devil and Daniel Webster-style tale, the production doesn't take long to start wandering, and sometimes quite aimlessly. As it weaves its story of a country singer (Matthew Raudsepp) falling under the spell of a devourer of souls (Greg Kramer) it pauses for songs which, for the most part, simply halt the play - indeed they seem to pad it. An hour into the show I was looking at my watch, 25 minutes later - at the conclusion - I was wondering why the piece had not been cut even more.

Raudsepp and Kramer keep their heads while all about them are losing theirs.

It's not that there is no there there; there is a decent amount of plot, atmospherics and a structure that could well be rendered musically. But nothing coheres and the flabbiness of both play (adapted from the Derek McCormack novel by Graham Cuthbertson) and production (directed by Andrew Shaver) become evident. Everything seems to be an add-on until you start to wonder if the entire point of the evening is less an ironic but reverent look at the conventions of deep-southern story-telling and music, and more a cynical hipster take on it.

At the centre of it all, though, are Raudsepp and Kramer who keep their heads while all about them are losing theirs. Raudsepp is such a fresh, genial presence and talented singer while Kramer simply dominates the stage when he is on it that their scenes together - a delicious tango of evil and eroticism - are the best of the evening.

This must also be said: it is a treat to have a seasoned four-piece band on stage though the volumes between text and music were sometimes trying. This is a glitch that can be taken care of. The rest, however, would require real work: cutting, defining rhythms, and - ultimately - deciding what the point of the evening should be.

The raw material and the talent is all there. Now it all needs to apply itself to something that is not quite so scattered.

Haunted Hillbilly is at Centaur Theatre to June 3
Posted by THE CHARLEBOIS POST at 10:51 PM