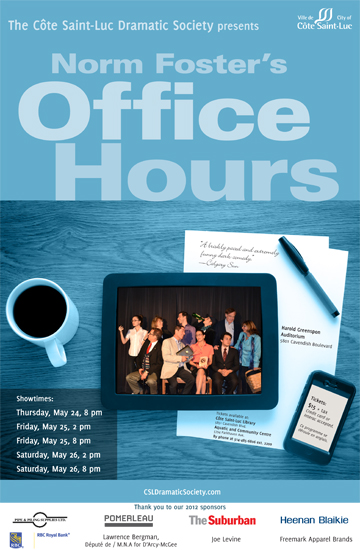 Mayor Anthony Housefather, Côte Saint-Luc city councillors Mitchell Brownstein and Sam Goldbloom, and Dollard des Ormeaux city councillor Herbert Brownstein will star with other members of the Côte Saint-Luc Dramatic Society.
Showtimes are at 8 pm on Thursday, May 24, Friday, May 25, and Saturday, May 26, with two 2 pm matinee performances on Friday and Saturday.
Tickets are $15 plus tax and are available at the Eleanor London Côte Saint-Luc Public Library (5851 Cavendish Blvd.), the Côte Saint-Luc Aquatic and Community Centre (5794 Parkhaven Ave.), or by telephone at 514-485-6806 ext. 2200. Credit card or Interac will be accepted.
“Côte Saint-Luc is committed to community theatre,” Mayor Housefather said. “I hope that my participation helps draw attention to this great community initiative
The January 2012 performances of the musical Grease were sold out.

Norm Foster’s Office Hours takes place during the same Friday afternoon in six different offices in the big city. We follow the stories that take place in each office, and, as they unfold, each story becomes connected with the other: A newsman who will do anything to keep his job, a Canadian producer willing to overlook the shortcomings of a down-and-out director, an entertainment agent caught in a scandal, a lawyer with big news to share, a delusional jockey, a love-starved therapist and a man on a ledge.
Anisa Cameron returns to direct the cast of 15, which includes also includes Ariel Sterlin, (who played Frenchy in Grease) as the production stage manager, and Scott Drysdale as the lighting and technical director.
The Halifax Daily News said that playwright Norm Foster “is Canada's most-produced dramatist, and no wonder. His snappy dialogue, everyday situations and gently balanced characters dare to represent that great, under-represented middle of North American society."
For more information about the production, visit CSLDramaticSociety.com.
About the Côte Saint-Luc Dramatic Society
The Côte Saint-Luc Dramatic Society is a community theatre initiative that began in the summer of 2011 in partnership with the City of Côte Saint-Luc. The goal of the society is to bring together actors, writers, musicians and other artistically-minded community members to produce theatrical works in an inclusive environment where emphasis is placed on team work and camaraderie, not celebrity.
Posted by THE CHARLEBOIS POST at 4:10 PM