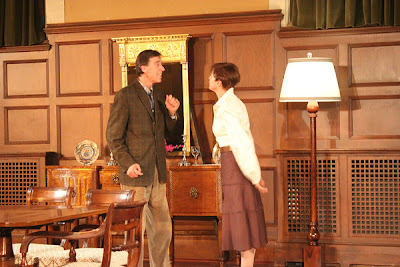 THE DINING ROOM REVEALS ITS SECRETS
By Byron Toben
Director Jacqueline van de Geer has helped Westmount's Dramatis Personae group of talented amateurs stage its best production in years.
She wisely chose The Dining Room by prolific playwright A. R. Gurney (41 plays!) as its current  show at the historic Victoria Hall. Why wisely? The group has 12 actors and this drama, with its 18 scenes and 40 roles, allows each of them to shine as several meaningful characters. This may make life more hectic for the stage managers with many quick changing costumes, but gives each actor a chance to strut their stuff, which is what keeps non remunerative community theatre alive.
Gurney often works the terrain of uptight New England patriarchs and matriarchs challenged with changing times, as is prevalent in novelist John Cheevers' stories (and indeed, Gurney's fourth play was A Cheever Evening). The Dining Room, his eleventh, was a big success on Broadway in 1982.

In form, the play is reminiscent of Thornton Wilder's one act 1931 play The Long Christmas Dinner. In that play, nine decades pass as generations of one family grow, argue, and pass on as time fades into the then future, all around the same long table.
Here, there is also a beautiful long table over seven decades in a high-ceilinged dining room, but the inhabitants are usually unrelated families in each scene. Many of the luxurious props were loaned from Henrietta Anthony Antiques, a Westmount fixture since 1958.
All of the dedicated Dramatis Personae  performers were fine. As they were further aided by Mr Gurney's proven script and Ms. Van de Geer's deft touches, it is hard to mention any one as a stand-out. A sign of a good ensemble. Some memorable portrayals in this sometimes wistful, sometimes sardonic, always amusing script were:
Malcolm McRae as an overbearing father who criticizes the maid for not straining a seed from his orange juice in the 1930s
Harriet Dove as a mother hosting a birthday party for her six year old daughter when the father of one of the kids (a secret lover) arrives too early in the 1950s
Ellen Rubin as an architect pitching the division of the dining room into two smaller spaces for a psychiatrist client in the 1970s
Ann Elbourne as the Alzheimer afflicted mother of the clan at a Thanksgiving dinner in the 1970s and again as a WASP petty bourgeois matron shocked that she is the subject of an anthropological study of a dying culture in the 1960s.
Edward Wong, both as a child peeved at his nanny leaving the household in the 1940s and again, as a grizzled grandpa being hit up for money by a young nephew in the 1960s. Grandpa bemoans the changing times and opines that in the future, “Some Irish guy or even a Jew will be sitting at this dining room table listening (to the pleas) of his own grand kids”
The stoic dining room table listens to all these varied tales and, despite its rather wooden acting style, manages to tell us, with strains of decade-appropriate music, the secrets of the incredible vanishing Dining Room as the centre of the house.
One big complaint. This show had only four visitations and two of them were last week. The remaining two are both on Sunday May 13, 2pm and 8 pm. Reservations at www.theatrewestmount.com or 514-484-2016
Posted by THE CHARLEBOIS POST at 5:34 PM