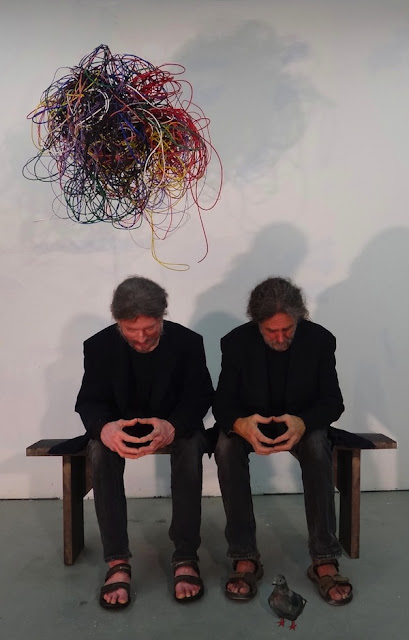 THERE AIN’T NO THEATRE LIKE IT
The Montreal International Anarchist Theatre Festival 2012
by Norman Nawrocki
It’s indisputable. Montreal has the world’s largest – and only – international anarchist theatre festival in the world. And like the local journal VOIR says, astonishingly, without any government or corporate support, they remain ‘the little, non-pretentious theatre festival that pulls off little miracles.’
In the past, the MIATF brought New York’s legendary The Living Theatre to town – a first – as well as Vermont’s acclaimed Bread and Puppet Theatre, and troupes from France and Belgium.
Now in it’s 7th year, the Montreal International Anarchist Theatre Festival (MIATF), offers yet another miraculous mixed program of international and local theatre, in English and French, May 15th and 16th,  at the Sala Rossa, 7:30pm,  at the ridiculously bargain price of $12 per night.

‘We want to keep theatre accessible for everyone,’ says co-artistic director Sandy Beach. Tickets are available at the door or in advance from the Montreal anarchist bookstore L’Insoumise, 2033 boul St-Laurent (tel: 514- 313-3489). No reserved seating.
Anarchist theatre worldwide, like the anarchist scene in Montreal, has never been more vibrant, the level of public curiosity about the ideas higher than ever before.

This means, the MIATF receives dozens of applications each year from theatre troupes spanning the globe. This year, more than 34 actors from the Philippines, France, the USA and Montreal will perform in 9 separate pieces. The festival includes puppetry, cabaret, solo shows, and large collective productions.
Tuesday May 15th
For the opening night, the Montreal-based Anarchist Writers Bloc (AWB) perform a new piece conceived for the MIATF called ‘Subversions 2 : Cabaret Anarchiste Cabaret’ – a peek into a typical Montreal underground anarchist cabaret scene. Normally, dozens of artists, established and new, are involved in these bi-monthly cabarets, running for 2 years now, where some of the city’s most talented poets, singers, actors and musicians come together to raise money to publish the world’s first two anthologies of new anarchist fiction.

The AWB is a core-group of 12 Montreal writers, actors, and artists, with 40 contributing members around the world.
The Burlington, Vermont Tooth and Nail Puppetry Front will perform ‘Texas Annie, a cantastoria (the oldest form of radical street performance; drawings or words on fabric or paper and a song or songs to tell the story of the pictures) about ‘a radical, dildo toting rebel in Texas who frees the community from sexual oppression with her lawless antics.’
Tooth & Nail Puppetry Front is an ever changing group of activist-artists working to uplift and provoke thought on a variety of important and relevant political issues using vaudeville-esque performance with puppetry, cantastoria, acting and song.
The MIATF is bilingual, and includes local Québecois author/actor/musician
Paul Grégoire, in a brand new French creation. Le Pigeon voyager (The travelling pigeon)  based on his recent book, Un hiver au P'tit Hippolyte (Hurtubise, 2011). His theatrical, musical and sculpture rooted pièce présents the universe of one of the city’s homeless men, a keen observer of everything around him, also blessed with a vivid imagination.
The first night will close with a collective creation based on a 4 week intensive theatrical laboratory workshop animated by four French actors from Lyon,
who arrived in Montreal last month and assembled a cast of local professional and amateur actors to work with them.  Le collectif des Esprits Solubles have performed their piece On arrête tout, on réfléchit et c'est pas triste (d’après L’An 01 de Gébé) all over France during the past twelve years using this same creative process. The director, Samuel Wego, works with different companies in France.
Le collectif des Esprits Solubles was founded in 1997.
Wednesday May 16th
For the second night, the MIATF opens with another puppetry show: Emma Goldman, where are you now?, performed by the local two-piece puppetry ensemble, All the Fixings.
“ Harper’s quasi-fascist government is running rampant, the debt crisis silently destroying the lives of billions, Sgt. Manning is being accused of war crimes for exposing war crimes, and oil is bleeding the earth dry. At a time when anarchism is more necessary, it is perhaps the most difficult. Using cantastoria, an ancient, flipbook like form of puppetry that incorporates story telling, animation and song, we will animate a brief history lesson on the life of Emma Goldman using hand-made illustrations and song. We plan to look back to Emma Goldman to remember and take to heart her beautiful ideals so that we can find them in ourselves and finally put our question to rest, “Emma Goldman, WHERE ARE YOU NOW?!”
No fun marguerite, a French-based theatre company will perform Science et Vie, Madame (Science and Life, madam), a farcial look at a research laboratory where they use viral research for defence purposes. The piece looks at the irreversibility of technological progress and what happens when research leads to the unthinkable.
A ‘psycho-pop comedy’ called Anar-Ecoute (Anarchist Listening)
will be performed by les Anarchistes Anonymes, a local Montreal theatre ensemble. The radio-talk show features an announcer who listens to anarchists confiding in her about their ‘illness,’ as they describe their daily activist practices, their complex personal relationships, disputes with room-mates, direct action etc. the piece is full of absurdist sketches based on the stories of local real-life anarchists.
The show is written by Montreal author/playwrite/actor, Bruno Massé in collaboration with les Anarchistes Anonymes.
The MIATF is pleased to welcome the Parisian author/actor Tom Nanty starring in his own one-man play called Paris Banlieu (Paris Suburbs). The piece proposes a comparison between Montreal and Paris, the city centre and the suburbs, the inner-city residents of Montreal living in poverty and the poor inhabiting the suburbs of Paris. Tom Nanty is a multi-disciplinary artist, trained formally in theatre in Paris, a child of the suburbs.
The closing play for the MIATF comes from the Philippines, via Poland.
The Manila De La Salle-College of Saint Benilde’s resident theatre company, Dulaang Filipino will perform their adaptation of Slawomir Mrozek's, Out at Sea.
“Three men find themselves on a raft in the middle of the ocean. Having something to eat Out at Sea is not a question of what... but whom. Someone has to be sacrificed and the three are struggling to find a 'just' and 'humane' way to decide for the right person is an absurd and macabre comedy on the edge of life. It explores the idiosyncrasies of the society we live in and reveals the absurdity of mankind in all it's comedy and pathos.”
Tuesday May 15th :
– On arrête tout, on réfléchit et c'est pas triste (d’après L’An 01 de Gébé), by le collectif des Esprits Solubles (Lyon, France)
– Le Pigeon voyageur, by Paul Grégoire (Montreal)
– Texas Annie, by the Tooth and Nail Puppetry Front (Burlington, Vermont)
– Cabaret Anarchiste Cabaret, by the Bloc des auteur-e-s anarchistes/Anarchist Writers Bloc (Mtl)
Wednesday May 16th :
– Out at Sea, by Slawomir Mrozek, performed by Dulaang Filipino (Manila,Philippines)
– Paris Banlieu, by Tom Nanty (Paris, France)
– Anar Ecoute by Les Anarchistes Anonymes (Mtl)
– Emma Goldman, where are you now? by All the Fixings (Mtl)
– Science & Vie, Madame, by No fun marguerite (Mtl)
The MIATF is part of Montreal’s annual Festival of Anarchy, which includes the thirteenth annual Montreal Anarchist Bookfair, May 19th and 20th, 2012.
INFO:
festivaltheatreanarchiste@yahoo.ca
www.anarchistetheatrefestival.com
Posted by THE CHARLEBOIS POST at 12:00 AM