Review: Now and At the Hour 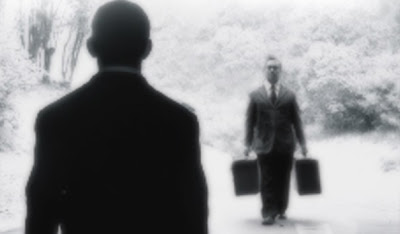 Memory Magic
Now and at the Hour a poignant piece on memory & PTSD
by Rebecca Ugolini
Some shows, like Christian Cagigal’s Now and at the Hour, presented by Beyond the Mountain Productions and the Rialto Theatre in benefit of the Montreal Children’s Hospital Foundation, are best understood in terms of the magical, inimitable ambiance they create. In the spirit of that magic, forget that this is a review for a few lines, and do as Cagigal asks his audience: “Humour me.”
A little past 8:00 PM, just as the Rialto’s lights begin to dim and an expectant silence settles over the audience, a compact man in a grey overcoat enters the hall carrying a piece of luggage in one arm and a rolled-up carpet under the other and makes his way noisily onto centre stage.
“All magic happens in one place… your imagination.”

As he apologizes for being late, unfurls the carpet and sets the stage with mysterious-looking objects—an antique cigar case, a wooden Viewfinder, a set of cards—Cagigal signals that this is to be no ordinary theatre performance. Beginning a short monologue and facing viewers at either end of the stage, he seems to look at each one individually before he tells them: “All magic happens in one place… your imagination.”
Over the next hour, Cagigal’s spellbinding sleight-of-hand magic tricks and autobiographical story-telling weave together the themes of repressed memory, treasured moments, and magic as he recounts his experiences as a young man dealing with his father’s Vietnam-induced PTSD. Cagigal’s touchingly honest narration invests the audience in the tale of a father and son brought together by a shared fascination with magic and separated by a wall of suppressed suffering and traumatic memories. Equally at home in the magician’s well-rehearsed hand flourishes and the slapstick comedian’s blustery pacing, Cagigal highlights the humour and tragedy in a fragile father-son relationship in which the son learns that he must “be the adult now.”
As he interweaves the narrative tracing the loss of his father to PTSD with exercises designed to call the audience’s attention to their own most loved or hated memories, Cagigal manages to pull off a performance which is witty, touching and fresh. Now and at the Hour bravely entrusts its success into the open-mindedness of its audience and the storytelling talent of its performer, and the results are admirable, breathtaking, and fittingly magic.
Now and At The Hour continues to May 26
Posted by THE CHARLEBOIS POST at 3:42 PM