First-Person: Michaela di Cesare on the evolution of Eight Ways My Mother Was Conceived 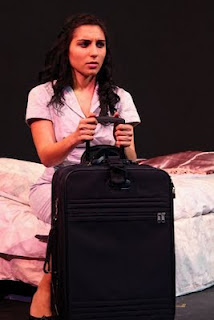 From one-woman (in every sense of the word) FRINGE show to true team effort
How this remount changes everything
by Michaela di Cesare
I was asked how the input of a new director, Tamara Brown, has taken 8 Ways my Mother was Conceived from a FRINGE production to something “more mainstage.”
This is going to be a little metaphysical. I can’t help it. Everything to do with this show has come about through a series of drastic life-changing events that have unfolded over a two-year period from the fall of 2009 to the fall of 2011 (roughly) which could not have fallen into place in a more literary fashion if they were being written into a novel. I’m only going to list the uncanny events that have to do with Tamara (because I think people are tired of hearing the story about how I fell in love and got married). I’ll begin by saying that in some ways her influence has been there from the beginning.
Fall 2009 – I had recently graduated from Concordia University and began working at Black Theatre Workshop as their box office coordinator on a six-month contract. This is where Tamara and I first met. Now, she probably won’t remember this, but we shared a moment I certainly never forgot. I was standing at the fax machine one morning when Tamara walked in and asked me if my father owned a shotgun. I didn’t follow and asked, “Sorry?” She said, “You must drive your Italian father nuts with all the boys lining up at your door.” Then, I don’t know why exactly, maybe because I never met ANYONE in theatre who had a strict father, I was intrigued and started rambling, “No, not exactly, I never really dated. I wasn’t allowed. I just have this one boyfriend. He has to marry me.” I thought I sounded pretty darn infantile, but Tamara added her own experiences of being raised in a religious environment and she made me feel so—normal. I’ve thought about that conversation many times since then. The subtext of that moment was this: the relationship I was referring to was going so badly I would cry at my desk when no one was around, yet I couldn’t bring myself to tell anyone. I didn’t even tell my mother until it was inevitable. I went through the entire break-up while I was working in that office, silently crying at my desk when no one was around, unable to talk about it. That experience became the catalyst for this show and, eventually, Tamara became its director.

August 2010-May 2011- I was in Toronto working on my MA and 8 Ways. I would have moments of seriously considering whether there would be a place for me in Montreal among the friends and colleagues I left behind when I returned.
June 2011- The play, in its initial incarnation, ran at the Montreal FRINGE Festival. The afternoon Tamara came to see the show, the tech had been failing me tremendously (goodbye video projection; you were never my friend) but throughout the run all I heard at the end of EVERY. SINGLE. LINE. was Tamara’s loud and infectious laugh. Afterwards, she told me all she cared to watch in that show was me and not the “damn screen” (her words), and from there the minimalist direction of the show was born—though I hadn’t asked her to be my director just yet.
Fall 2011- Following a funding award I received, I proposed the remount to Tamara and she said yes! From there, we gathered the support of Playwrights Workshop Montreal and went on a rewriting blitz. A creative team was hand-picked by the lovely new director and the ideas and energy flowing into the project were limitless.
When we finally got into the rehearsal space, Tamara’s approach was astonishing. It was as though she knew every one of my characters, as though she loved them. She had insight into their backgrounds that displayed uncanny artifice on her part. Most importantly, she taught me not to judge any of them.
With that, we come to the representation of my characters. The question of representation. I haven’t spoken on this subject yet. Frankly, I’m surprised no journalist has asked it yet. I’m also lucky the question hasn’t been asked because I haven’t decided yet what my answer is. It is no secret that what we have on our hands in an autobiomythography. Everything and everyone comes from my life, and yet these characters live apart. They belong to me and they exist in the world of the play as in a parallel universe. I have had the luxury of knowing how most people who are represented in this play feel about it: good and bad. Some characters are inspired by people I’ve known fleetingly: a teacher, a doctor, an Italian dude who hit on me—my memory, which doesn’t respect the border in my brain it shares with my imagination, has probably made of them something entirely different from what they were.  I’ve spent a lot of time pondering what the ethics of this kind of representation are, but at the end of the day it always comes back to this: the story needs to be told and every element in it is there for a reason.
There are some characters in this play who are struggling to finally have a chance to speak. For the most part, these are the three central figures who, in our parallel world, are deceased.  I will never have the peace of mind to know if I did their message justice in their eyes, and when it comes to representation that is my only real problem.
So, all I can promise is this. Coming back to what Tamara has brought to the play, I promise I am being true to every one of the characters. I don’t comment on their words or actions. For the moments that they are alive on stage, I am gone and they can speak their truth. Nobody is made a fool in this play but me. I was the fool who ignored my own truth for far too long.
Speaking of fools and the new direction of the show, I will leave you with this:
Any intelligent fool can make things bigger and more complex... It takes a touch of genius - and a lot of courage to move in the opposite direction.
-Albert Einstein

8 Ways My Mother Was Conceived is at the Rialto Theatre May 24-27
Posted by THE CHARLEBOIS POST at 12:02 AM